Australia’s Bronson La’Cassie outlasted Matt Bettencourt in a three-hole play-off on Sunday to win the Cox Classic and earn a PGA Tour card for next year.

The victory ensured La’Cassie rose into the top 25 on the Web.com Tour money list, which secured the 30-year-old Brisbane-born golfer a spot on the 2013-14 PGA Tour. 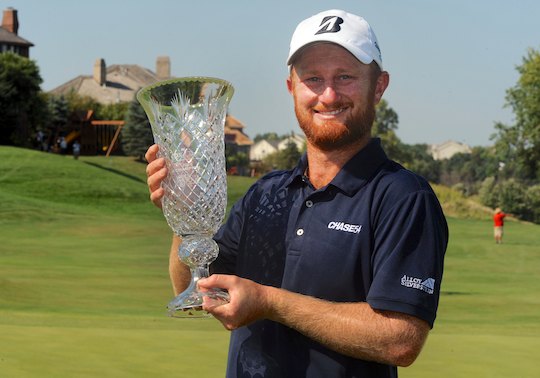 La’Cassie notched his maiden victory on the second-tier Web.com Tour when he posted a third straight par score in the play-off at Champions Run in Omaha.

“It feels really good,” said La’Cassie who attended collegiate golf in the US and won the prestigious Western Amateur in 2006, before turning professional a year later.

“It gives you the belief that you can do it again so it feels great. I’ve never been to the tour before, so that will be sweet.”

La’Cassie’s only other professional tour victory came on the Hooters Tour in 2009 when he secured the Sunset Hills Classic.

La’Cassie started playing at age six grinding out his formative years playing local and state events in Queensland. He didn’t start getting serious until age 14 and knew that if he wanted to accomplish his goals he would need to play in America.

“I’ve always wanted to play in America watching it on TV back home,” said the 30-year-old La’Cassie.

“This is the place you want to be if you’re going to make it.”

The former Brisbane-based golf and Queensland State representative now has his sights set on the big league.

“I’m playing well,” he said. “I’m really not going to worry about too much and just keep playing.”

La’Cassie becomes the 12th first-time winner in 21 events this year and has made the cut in 10 of 19 starts this season. He also posted top-10 finishes at the Mid-Atlantic Championship (T3) and the Albertsons Boise Open (T3).

“It’s good to get a win, I’ve played out here for three year’s now and finally do that and to get the card seven better. I had taken a week off last week which was a bit risky, but it finally worked out.”

The four-event Web.com Tour Finals begins this week at the Hotel Fitness Championship. A total of 150 players will be eligible to participate – the 75 players who rank between 126-200 on the FedEx Cup points list and the 75 players at the top of the Web.com.