India’s Anirban Lahiri cemented his place in this year’s Masters field with a play-off victory in the Hero Indian Open in New Delhi.

Australia’s Marcus Fraser finished one shot out of the two-man playoff and will be rueing his costly double-bogey six at the 13th hole on Sunday. 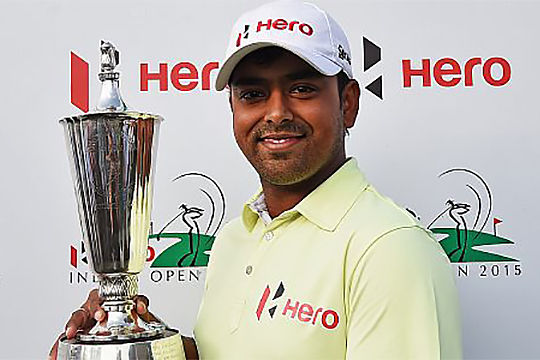 Lahiri, who had claimed his first three professional events on the New Dehli course, won with a birdie at the first extra hole from Indian-born compatriot SSP Chawrasia, who recorded a bogey.

The World No. 39 is now heading to next fortnight’s WGC – Cadillac Championship before making his first Masters showing at Augusta National in April.

“It is incredible and starting out today I didn’t think I had a chance,” he said after teeing up on day four seven shots behind Chawrasia.

“Just how it panned out was tough and it was one of the toughest days ever that I have played here at the Dehli Golf Club.”

“To have accomplished this victory is a childhood dream and to have an Indian Open trophy at home is very, very special.”

“All I was trying to do today was play well and try and give myself a chance on the back nine given it was such an important week for me.”

“And just the way it worked out with the leaders having a tough start as there was about eight of us who could have won today, so I feel very lucky and I am really, really happy.”

It is Lahiri’s second victory in three weeks after capturing the recent Maybank Malaysian Open.

The all-Indian play-off ensured an eighth home-grown winner of the Indian Open in the 51-year staging of the event.

Chawrasia went into the final round leading by two shots but buckled over the final 18 holes posting a horror final round of 76, which included a 15th hole birdie but also five bogeys and a fourth hole double-bogey.

There was a warm scene on the 18th tee moments before the play-off with the two Indian born players embracing each other.

However those sentiments didn’t last long with Chawrasia again in trouble putting his rescue club tee shot into bushes down the left side and then having to bend over in the trees to hit his shot just 10 yards back on the fairway.

It is the fourth occasion Chawrasia has been runner-up in his ‘home’ Open.

Lahiri moves to second on the Race to Dubai and is the first two-time winner this season and to think just a few months ago he was at the Tour’s Q-School looking to regain his card.

“It’s hard to come to terms with as six months ago I was in Spain at the Q-School and really, really with five holes to play of not regaining my Tour card,” he said.

“So it feels though I have skipped a couple of steps to where I have gotten to right now but it is a fantastic feeling and hopefully I can continue to play well.”

The European Tour now heads to South Africa for the Joburg Open at the Royal Johannesburg & Kensington Golf Club.