Indian star Anirban Lahiri and Australian defending champion Scott Hend staged a memorable tussle during the final round at the Venetian Macau Open, with Lahiri eventually claiming a one-stroke victory when Hend bogeyed the final hole.

In fantastic form after his win in last week’s Hong Kong Open, Hend started the day with a two-stroke lead at the Macau Golf and Country Club and extended that to four strokes following an eagle on the front nine. 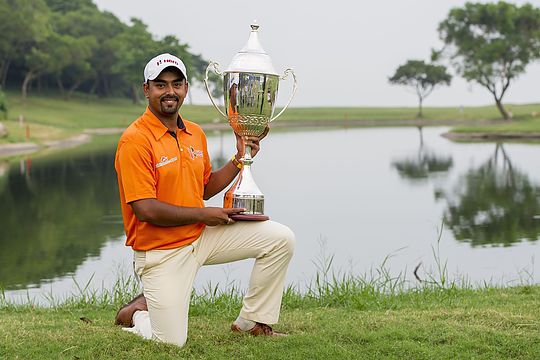 However, Lahiri clawed his way back and after a birdie to Hend’s bogey at the par-three 14th and another birdie at the 15th, took the lead for the first time.

Hend fought back immediately with a birdie at 16 but lipped out a four-foot par putt at the last to ensure Lahiri took the winner’s cheque of US$162,000.

“It’s really special. Hendy was playing great golf and it was sad to see him missing that putt on the last,” said Lahiri, who secured his second win of the season and fifth Asian Tour victory.

“I knew he was playing some good golf and I told myself that I was going to keep coming back, keep coming back and keep attacking. I wanted to make him think I was not going to go away. I think I played really well.”

“I hit a perfect golf shot on 14,” said Lahiri. “I had just missed a putt at the previous hole and I knew I needed a birdie to catch Hendy and that was just magic the way it came down. I hit a seven-iron as hard and high as I could and it came out perfect.”

Hend finished with a 69 to tie Thailand’s Prom Meesawat (66) for second with Sydney’s Adam Groom two strokes further back in a tie for 5th place at 10-under after a final round 66.

“I hit too many loose shots and then on the last hole, I had a lip out which I thought I put a good putt on it.” Hend lamented, “Unfortunately it lipped out. I looked up to see it lipping out. I thought I had made the putt.”

“To be honest, the tournament had slipped as the tee shot wasn’t in play. I had to hit the fairway which would have made it a lot easier but I missed the fairway, which made my job a little bit harder.”

The PGA Tour co-sanctioned CIMB Classic to be held this week at the Kuala Lumpur Golf and Country Club is the next event on the Asian Tour schedule.