The 27-year-old from India birdied four of his first five holes and held his nerve down the closing stretch as a final round 68 gave him a 16 under par total and a one shot victory. 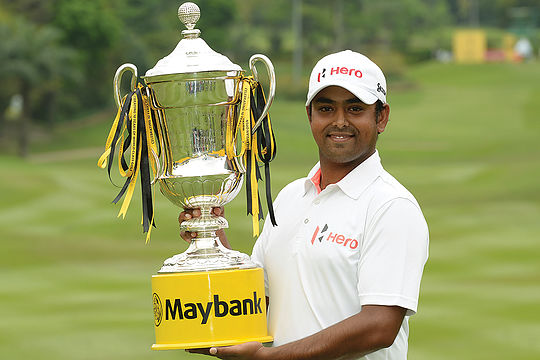 Lahiri’s maiden European Tour title comes just three months after coming through Qualifying School, and is all the more remarkable given he was outside the top 20 at the halfway stage.

A sensational ten under par 62 on Saturday gave him a chance, but in-form Wiesberger appeared a clear favourite when he started the day two shots clear of Alejandro Cañizares and five ahead of the eventual winner.

The Austrian, who climbed into the Official World Golf Ranking’s top 50 for the first time by finishing sixth, third and fourth in the three Desert Swing events, even birdied the first two holes on Sunday – both courtesy of eight foot putts.

But, after laying up at the par five, Wiesberger chunked his third into the water at the fifth and ran up a double bogey seven to blow the title race wide open.

After converting from 18 feet at the first and a par the second, Lahiri, who already had five titles on the co-sanctioning Asian Tour, tapped in at the third, holed from ten feet at the fourth and pitched to six feet at the fifth for a hat-trick of gains that left him just one behind.

With the breeze picking up, Wiesberger was happy to head to the turn with a run of pars, and it was enough to restore his two shot advantage as Lahiri did well to escape the ninth with a bogey after almost finding water off the tee.

Lahiri reduced the gap to one again with a birdie from 12 feet at the tenth, and although Wiesberger paid the price for missing the fairway at the 12th, where there was just one birdie all day, up ahead Lahiri dropped a shot from the sand at the 13th – where there were no birdies on Sunday and the field were a collective 31 over par.

Wiesberger did well to salvage his four there after driving into the trees, but paid for another errant tee shot at the 14th when he failed to get up-and-down from behind the green.

The Austrian did manage to rescue par from a greenside bunker at the 15th, but Lahiri rolled in a 40 foot putt from off the green at the 17th to snatch the outright lead for the first time and, although Wiesberger birdied the 16th from inside five feet, he made a mess of his approach to the next to hand the shot straight back.

Lahiri found sand at the last but scrambled par and, when Wiesberger left his 20 foot birdie effort agonisingly short, the World Number 73 was confirmed as champion – with a place in the game’s top 50 and a potential Masters Tournament invite among his rewards along with the €439,796 winner’s cheque.

“I don’t think it’s sunk in just yet,” said Lahiri. “But I’m pretty sure when it hits home it’s going to be a really happy moment for me.”

“I think I’ve got a bad habit of making it hard for myself, but I’m happy I got over the line, as ugly as it was towards the end.”

“The Masters is definitely one of my targets. I don’t know how far I’ll move up, but I’m pretty confident now with this win I should have a pretty good chance.”

Of Saturday’s 62, he added: “In hindsight that was one of the most crucial rounds of my career and it’s fantastic when you play well at the right times.”

A fourth top-ten finish in a row moves Wiesberger into the top five on The Race to Dubai, but the 29 year old was left to rue the errors in his closing 74.

England’s Paul Waring and Spain’s Cañizares were also over par for the day, but finished tied for third on 13 under, while the anticipated challenge of defending champion Lee Westwood never materialised after the former World Number One double bogeyed the second en route to a round of 75 and share of fifth.

Wade Ormsby and rookie Nathan Holman shared 11th place and were the best of the large Australian field in Malaysia this week.