Scotland’s Martin Laird has captured a second Shriners Hospital for Chidren Open victory helped by a miracle bunker shot en route to a playoff victory on the TPC Summerlin course in Las Vegas.

Laird, 37, sensationally eagled the par-5 ninth hole after being buried in a greenside bunker before a bogey at the last dropped him into a tie at the top on 23-under par alongside American’s Matthew Wolfe (66) and Austin Cook (66).

Following pars at the first playoff hole, Laird then holed a 16-foot birdie putt at the second extra hole, the par-3 17th, to defeat his younger American rivals.

Remarkably, it was Laird’s third play-off at the Las Vegas event and he made it two from three to secure his fourth PGA Tour success.

“It’s been seven years since my last win but then since returning to competition [following knee surgery] my game has been feeling really good and I’ve been playing well,” said Laird alluding to the 2,744 days since the proud Scot captured the 2013 Valero Texas Open. 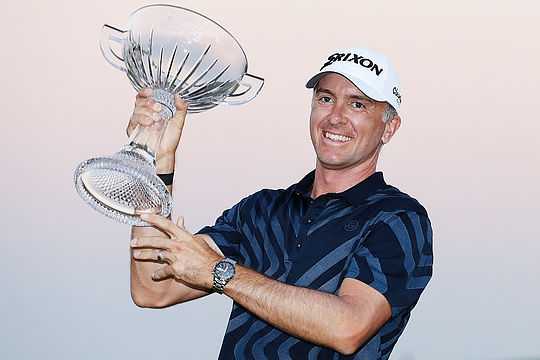 “Shriners were nice enough to give me a sponsor’s invitation so a big thank you to Shriners…I am really going to enjoy this win.”

“I can’t wait to get back to see my kids and my wife and celebrate with them.”

The now Denver-based Laird, who had to undergo an emergency operation on his knee during the lockdown, went into the final day of the $7 million event sharing the lead at 20-under par with American Patrick Cantlay.

It was a steady start for Laird with five outwards pars before back-to-back birdies on the sixth and seventh were followed by a dropped shot at the eighth.

He found the 9th fairway with a 297-yard drive but his 250-yard second shot missed the green and became buried at the edge of a bunker some 20-feet shy of the flag.

It looked an almost impossible shot and the TV commentators agreed: “Oh, this is an awful shot”, “He’s got a terrible lie” and “He may not get this out.”

Laird took his time before blasting out and with sand drifting into his face and over his body, he watched as his ball landed on the green and rolled all the way to the bottom of the cup. The Scot had played the 9th – birdie, eagle, eagle and now another eagle – to be seven-under on the one hole.

There was no-one more delighted than the Scot with the eagle ‘3’ moving him to 23-under par and now three shots in front of his rivals.

Little did he know at the time just how important that shot be in the final result.

Laird gave one shot back with a bogey at 10 to drop back into a share of the lead at 22-under with American Austin Cook, who birdied both the 12th and 13th but then bogeyed the next to leave Laird leading by one.

Though the 29-year old Arkansas golfer would not go away grabbing a birdie on 15 to tie Laird but with the Scot playing a super uphill lie second shot from the leftside of the par-5 13th and then getting up-and-down from some 60-feet from the flag for the third birdie of his round and move back to 23-under par.

Laird then displayed his class in seizing a fourth birdie at the par-4 15th when he was forced to putt from the shadow of a TV tower that completely covered the distance of his putt.

An NBC TV commentator remarked: “He will be lucky to make ‘4’ from there!”

Laird threaded his shot between the trees and onto the green and then calmly holed an incredible 17-foot putt ahead of more drama at the last, where he missed the green right and took a bogey ’5′ after falling agonisingly short of the hole.

Despite the late round drama, Laird collects a cool $1.2 million for his win and a Tour exemption to the end of the 2022/23 season.

The proud Scot can also start making arrangements to return to January’s Tournament of Champions as well as teeing it up at the 2021 Masters, in what will be his first appearance in eight years.

Victory will also see Laird jump some 263 spots on the World Rankings to No. 88 in the world and his highest ranking since June 2017 in finishing T3 at the Quicken Loans Open.

There wasn’t a lot of good news for the Aussies this week with Cameron Smith leading the way in a share of 24th while Cameron Davis and Matt Jones shared 52nd after throwing away solid starts ahead of the weekend.

The Tour stays in Las Vegas for the CJ Cup, which was forced to move from South Korea due to the pandemic. Justin Thomas will defend the title he won last year by two strokes over New Zealand’s Danny Lee.