Martin Laird is heading to this week’s Masters in stunning form after ending a two-year winless drought in capturing the Valero Texas Open in San Antonio.

The Scot carded a blistering final round 63 to deny world number two, Rory McIlroy, the Texas title by two shots with a 14-under par tally in bright but windy conditions on the TPC San Antonio course. 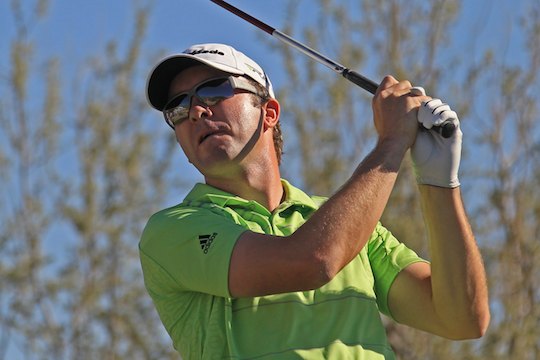 McIlroy did his best to counter Laird’s challenge and could be pleased with his best result all season after finishing with a 66 for a 12-under par tally.

Laird had begun the last round four strokes off the lead but sprinted into his closing 18 holes to be five under through eight holes.

He then went to six under par with a birdie at the par three, 12th hole and raced ahead of the field to distance himself from McIlroy with back-to-back birdies at the 16th and 17th holes to be eight under par for his round.

A day earlier Laird had ended his third round hitting a female marshal on the ankle with his errant second shot into the final green on the TPC San Antonio course.

However he then hit the flagstick with his chip shot and holed the three foot birdie putt that left him lying four shots behind American Billy Horschel.

Horschel had been joint runner-up in last week’s Shell Houston Open and like Laird the Florida golfer was desperate to secure not only his first PGA Tour success by also the last invitation into the Masters.

Laird had not competed in San Antonio for four years when he was placed ninth.

However after a disappointing first round last week in Houston Laird had a lengthy session with his coach, Randy Smith, who previously worked with former Open Champion Justin Leonard, and then came out and played the last seven holes on day two in five under par.

Unfortunately, Laird ended up one shot shy of playing all four rounds in Houston.

However he took that form over the second round west into San Antonio for a third PGA Tour success after earlier career Tour wins in the 2009 Justin Timberlake Shriners Hospitals for Children Open and the 2011 Arnold Palmer Invitational.

Laird arrived in San Antonio having earned $69,200 but he’s now added $1.116m to that tally along with a two-year PGA Tour exemption.

The Scot also was presented with a specially made Texas Open cowboy boots.

But of more importance to Laird is that he now joins fellow Scots Sandy Lyle and Paul Lawrie in Thursday’s starting Masters at Augusta National.

It will be Laird’s third appearance since making his debut in 2011 when he played the final round alongside Tiger Woods, who finished in a share of fourth behind South African Charl Schwartzel.