For the past decade, the golf course at Lane Cove in Sydney’s lower North Shore has been at the centre of a highly emotive turf war that is becoming a recurring nightmare for the golfing community. Public golf layouts have been constantly under review by local councils around Australia, particularly in metropolitan areas.

On Sunday the Lane Cove Golf Club won the Golf NSW W Gibson Trophy, a team competition of ‘C’ Grade Golfers with over 40 Sydney Metropolitan clubs in 11 Sections playing six round games to qualify for the elimination finals. The W Gibson Trophy has been played since 1957, from which Lane Cove has won the flag now two times, the last in 1976. 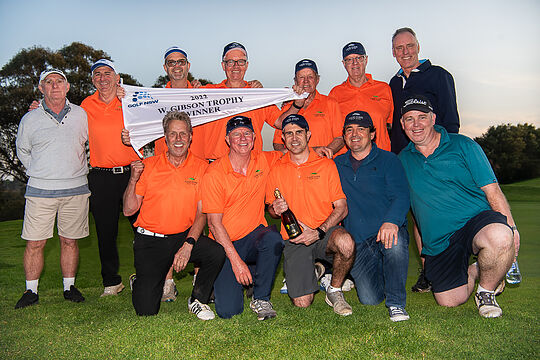 This was a remarkable achievement for a small club that for over a decade has been dealing with justification issues and actions from local government.

Given urban density and climate change, the battle for public land is becoming an ever hot topic. The debate is never stopping as rival sports argue their position and claim for space on public utilities.

Lane Cove Golf Club is one of a growing list of public golf facilities that have had to justify their right to large parcels of council land. When the city’s COVID-19 lockdowns forced the temporary travel restrictions, locals flocked to this secluded 9 hole layout on Sydney’s Lower North Shore.

The fact is it was the Club that built their own clubhouse and whose members were also responsible for the original layout back in the 1960′s. But that is history.

The Club and the continued operation of the golf course has been under threat due to a proposed development being pursued by Lane Cove Council for a $75 million dollar sports precinct to primarily accomodate basketball and netball.

Concept plans released by Lane Cove Council and obtained by GolfGrinder indicate the first hole will be reduced by over 50 metres to allow for four outdoor netball courts. It is unclear that during construction whether the 7th, 8th and 9th holes will remain open due to construction areas and related materials that need to be on site and if the golf course will even continue to operate.

Sydney is losing public courses at a rapid rate.

Cammeray Golf Club, opened in 1906 and once regarded as one of Australia’s best nine-hole layouts, has been closed ‘temporarily’ for a Warringah Freeway upgrade. There are plans for a revamped par 3 only layout in the pipeline, but there’s no certainty.

Chatswood Golf Club closed last May with the 18-hole layout to re-open in 2024 with just 12 holes following a major redevelopment of a ‘seniors’ style living community.

Warringah Golf Club was under threat by the Northern Beaches Council with considerations as to reducing the 18 holes into nine holes and the use of the land provided for other sporting uses.

Balgowlah Golf Club was under threat of road works but narrowly dodged the built. Marrickville Golf Club also was under scrutiny with council wanting to turn part of its fairways into public parkland.

“Lane Cove Council has been working with the community for nearly 10 years to find a balance among community and sporting groups and value for ratepayers for 180 River Rd,” said a spokesperson for Lane Cove Council.

“On 17 September, council hosted a workshop with a cross section of stakeholders to hear more thoughts and ideas on how to refine a new sport and recreation facility. This included what features could be included and how to design specific features to best meet community needs. You can view the summary of that feedback and the presentation from the architects on council’s website.”

“Council has carefully analysed all of the feedback and it will be presented in a report at the council meeting (29 Sep) for councillors to consider. This workshop followed online surveys, face-to-face consultation and other stakeholder engagement over several years. Many different ideas and concepts have been canvased, with 8 courts (4 indoor and 4 outdoor) being the preferred option that is being considered at the meeting tonight.”