American Brittany Lang has played the golf of her life to walk away from a second consecutive rules-affected controversy at a US Open, taking out her first major championship at the US Women’s Open in San Martin, California.

In what was another pounding headache finish for USGA officials, a rules infraction was called on Lang’s playoff opponent Anna Nordqvist after the Swede had been adjudged to have grounded her club on her takeaway from a fairway bunker on the second of three aggregate playoff holes. 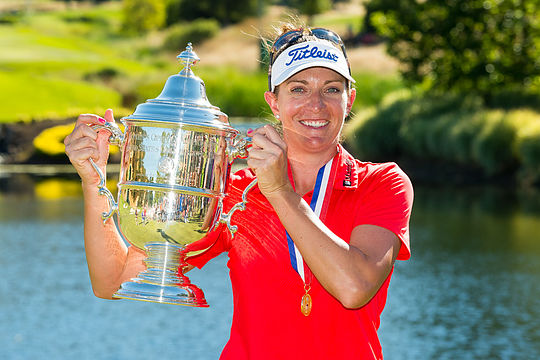 Then, when all was said and done, USGA president Diana Murphy referred to the new champ as ‘Bethany’ in the trophy presentation, numerous times, in a repeat of a similar guffawing performance at the men’s Open last month.

Not that that fazed Lang who had waited a very long time between drinks to chalk up her second LPGA victory, and in her national championship at that.

“You never want to win with a penalty or something like that happening, especially to Anna, who is a friend of mine and a great player and a classy girl,” Lang said. “It’s unfortunate. I still had to play pretty damn good golf to get up there. So, I’m really proud of myself.”

The USGA must be asking themselves why they can’t seem to take a trick at these national championships but while the Norquist penalty by comparison to Dustin Johnson’s at Oakmont was more clear cut on TV vision, controversy once again played out around the timing of the communication to the players of the ensuing penalty.

While the infraction occurred on the 17th hole, the second in the playoff, Nordqvist was only informed of the penalty after hitting her third shot into the 18th green at the third playoff hole.

Nordqvist, who shot a brilliant five-under round of 67 on the final day to tie with Lang, hadn’t picked up on the fact that she had grazed the sand on the 17th when playing the shot. While she did not dispute the ruling when advised, she had every right to be disappointed with how long it took to relay the message to her.

Norquist said later this certainly would have altered the way she played her third shot to a treacherous pin location tucked near water at the 18th. It certainly affected Lang’s thinking as she opted to pitch away from trouble to the middle of the green when she knew Norquist was to be penalised.

“It was quite a long time in between,” Nordqvist said. “With all the cameras and all the tension, you would figure that they would have told me just when it happened, or when we were walking up 17. And certainly not after I hit my third shot and before Brittany hit her third shot.”

“It certainly changed her game plan. But, hopefully, we can all learn from it and we can all get better.”

In the USGA’s defence, they were only alerted to the possible infraction by the Fox network and just like at Oakmont, senior officials needed to come off the course as quickly as they could to view the vision and make a decision.

Once the infraction had been conformed, they then radioed to the referee following the group to notify the players ‘as soon as possible’ – which unfortunately didn’t occur till the approach shots to the 18th.

Earlier, world number one Lydia Ko lost control of the championship with a double-bogey seven on the 9th hole to fall out of the lead on a day where the New Zealander was clearly struggling with her swing.

US Opens have a habit of doing that even to the best and she eventually signed for a three-over 75 to share third place with Amy Yang, Eun-Hee Ji and Sung Hyun Park at four-under, two strokes behind the leaders.

Australians Karrie Webb and Minjee Lee were both tied for 46th place, well back of the leaders at five-over par around the Cordevalle layout.