1985 and 1993 Masters champion Bernhard Langer showed again at age 58 the ageless game that has allowed him to be a such dominant presence on the Champions Tour is still a match for the young guys, despite the disappointment of a 7-over 79 in the final round at Augusta to finish T24 at the weekend.

Langer began the final round just two strokes off Jordan Spieth’s 3-under par lead but the fairytale was not to be as he slid a couple over par for the day on the front nine as Spieth took the lead out beyond his reach. 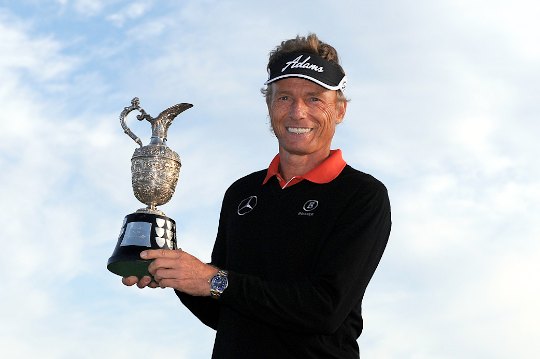 With a win, Langer would have become the oldest winner in PGA TOUR history, surpassing Sam Snead who won the 1965 Greater Greensboro Open (Wyndham Championship) at the age of 52 years, 10 months, 8 days.

30 years ago this week, Jack Nicklaus at age 46 set the record for the oldest Masters champion with his magical final round 65 but the mantle of the history’s oldest major winner remains firmly in the hands of Julius Boros, who prevailed at the 1968 PGA Championship at the age of 48.

Many have flirted with breaking this near 48-year old record, the most astounding of course being Tom Watson’s losing playoff bid against Stewart Cink in the 2009 Open Championship at Turnberry at age 59.

A year early, Australia’s Greg Norman made a similar run at a third Claret Jug at Royal Birkdale at age 53. The Shark was tied for the lead with 9 holes to play but could not keep pace with the withering run made by Padraig Harrington and eventually finished in a tie for 3rd.

The Masters still appears to be the best opportunity players 48 years and over have at breaking the major record, particularly past champions like Langer, Vijay Singh and Fred Couples who still compete regularly and have great course knowledge of Augusta National to fall back on each year.

However for now, the name Boros remains firmly in the record books for the older generation to aspire to.