Spain’s Pablo Larrazabal was pinching himself knowing he had defeated both Phil Mickelson and Rory McIlroy to end a near three-year winless run with victory at the Abu Dhabi HSBC Golf Championship.

The 30-year old Barcelona-born Larrazabal came from three strokes behind heading to the last day to hole a seven-foot birdie at the final hole for a 14-under par tally. 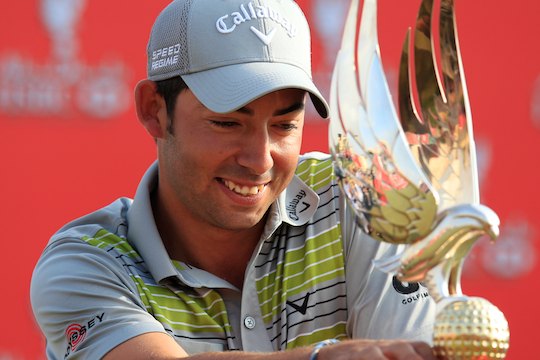 An emotional Larrrazabal, who set-up victory with a 253-metre 5-wood second shot into the final green, relegated Phil Mickelson (69) and last day playing partner McIlroy (68) into a share of second place on 13-under par.

“It means a lot to win my third victory on Tour and playing against who I played today,” said Larrazabal.

“Of course, I play against myself but I knew who I also had behind me in Mickelson.”

“I have just beaten two of the three most talented guys in my era, and in the last era, as well in Phil Mickelson and Rory.”

“I was sitting at the presentation ceremony I said to myself: ‘Pablo? What are you doing here?’”

“I’ve got Rory McIlroy on my left and I am shaking the hand of Phil Mickelson on my right. It’s very special for me.”

“But it’s been a long journey and a lot of work since my last win in Munich, and only my team and my family know how hard I have worked for this victory with no holidays, and not too many days off this winter, just working hard to arrive here properly and in form to Abu Dhabi.”

Mickelson was left ruing having to call a one-stroke penalty on himself at the 13th hole when, in playing a 4-iron shot right-handed from under bushes, his ball ricocheted off a branch and struck his club.

The five-time Major winner had been in a share of the lead at the time after picking up three birdies in his opening 10 holes but walked off the 13th recording a triple bogey ‘7’.

However the reigning British Open champion put the incident behind him to birdie the next and also birdieing the 16th and last holes but fall one shot shy of forcing a play-off.

“It happens, it happens but it never crossed my mind I might double hit it,” he said.

“I was just trying to dribble it out of the bush because I couldn’t get the unplayable penalty lie to give me a shot without stroke and distance and I felt it was worth the risk.”

“It not only cost a penalty shot, but it also stopped the ball from going to a spot where I could hit again.”

“So after that I got refocused and got aggressive and made some birdies and gave myself a chance. If Pablo had not birdied the last hole to win, I would have gotten into a play-off, and so I give him a lot of credit for finishing the tournament off the right way.”

And while Mickelson was returning home for his first PGA event of the New Year, at this coming week’s Farmers Insurance Open at Torrey Pines, McIlroy is returning to nearby Dubai to continue working on his game.

It is the second occasion in three years he has let slip victory in Abu Dhabi because of a rules violation.

McIlroy had been penalised for illegally brushing sand off his line on the final day of the 2012 event before losing by a stroke to England’s Robert Rock.

On Saturday, the double Major winner was slapped with a two-shot penalty after being reported by the caddy of another player in not taking ‘full relief’ from a spectator cross walk.

“I can’t describe how frustrating it is and feeling like I should be standing here at 15-under par for the tournament and winning by one,” he said.

“But that’s the way it goes. I played the least shots of anyone this week. So, I mean, I count it as a moral victory more than anything else.”

“It is a very positive start to the season so I’m not to let one little negative ruin that.”

“It was not until I finished one behind on the 18th that it started to dawn on me if what happened yesterday had not happened, I would have won.”

“But Pablo played well, and I can’t take anything away from him. When he needed to, he hit the shots, and the two shots he hit into 18 were straight out of the drawer, so fair play to him.”

“It’s good to see. He’s a good guy, one of my closer friends out here and good to see him get the win.”

Larrazabal earned a first prize cheque for $US450,000 to move straight to seventh on the Race to Dubai and to 12th on the European Ryder Cup Team points table.

As well, the current World No. 103 ranked player should move inside the top-64 on the rankings when adjusted Monday and the guarantee a first-ever place in next months $8.5m Accenture Match-Play Championship in Arizona.