Pablo Larrazábal has made it back-to-back wins for the Spaniards on the European Tour following a remarkable comeback at the Alfred Dunhill Championship in South Africa.

Larrazábal began the final round with a three-shot buffer but struggled with his game for most of the day with six bogeys and a double-bogey leaving him as far as three shots off the lead. 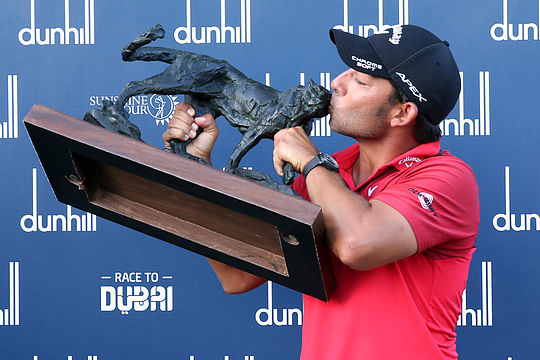 However, the 36-year-old was able to turn things around at the 15th hole with a birdie with another two dropping at the 16th and 18th holes to card a 3-over 75 and seal the deal by one over Sweden’s Joel Sjöholm.

Larrazábal’s efforts at Leopard Creek saw him take home €237,750.00 and his fifth European Tour victory and his first in over 4 years.

“I woke up this morning and I didn’t think I was going to play,” said Larrazábal.

“I couldn’t put my shoe on, I couldn’t walk to the buggy. I really struggled on the back nine, I have a big blister on my right toe and I said to myself ‘If Tiger can win a US Open with a broken leg…’ and I just fought hard.”

“It’s been a long road the last few years and this is where I want to be.”

“Being a winner again means so much. I’ve been working hard, I put as many hours in as I’ve put in in my golfing career and this is what for.”

Jake McLeod was the lone Aussie in the field but he missed the weekend cut in what was his first tournament after earning his European Tour card back at Q-School recently.

The European Tour now heads east for the Mauritius Open before the final tournament of this year on the Gold Coast at the Australian PGA Championship from 19-22 December.