Spaniard Pablo Larrazabal has made it back-to-back wins in South Africa after he birdied the second extra play-off hole to win the inaugural MyGolfLife Open on the Pecanwood course in Pretoria. 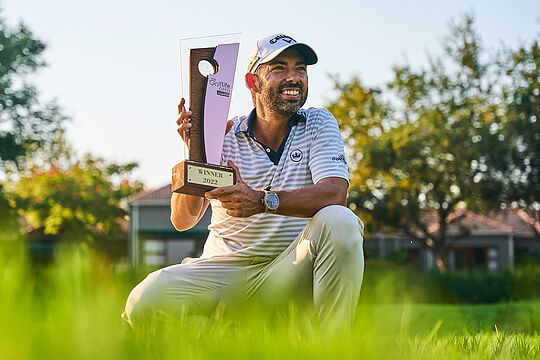 Larrazabal superbly landed his approach shot around four-feet right of the flag, and this after Smith’s second shot kicked horribly to end in the back left corner of the green.

The win is Larrazabal’s sixth DP World Tour title and his second in succession in the Rainbow nation after winning the 2019 Alfred Dunhill Championship that was the opening event of the 2019/20 wraparound European Tour season.

Since coming through the Qualifying School in 2007 and winning the Sir Henry Cotton Rookie of the Year Award the following season, Larrazábal has been one of the DP World Tour’s most consistent performers for over a decade.

“You guys are fantastic to me,” Larrazabal said in paying tribute to the South African nation. “Since the first time I stepped into this country in December 2007 I realised that this country has something very, very special and it’s you – the people.”

He was also quick to pay tribute to long-time caddie Raúl Quirós, who missed his last victory at Leopard Creek Country Club.

“He has been on the bag for six years and the one week he didn’t come was here in South Africa at Leopard Creek,” he said. “He had a week off and I had the trophy so I want to thank him for all these years and congratulate him.”

Jason Scrivener and Maverick Antcliff were the ones Aussies to make the cut with the pair finishing well down the leaderboard at 72nd and 76th respectively.

Scott Hend missed the cut and continues his weekend woes that date back to the Mallorca Golf Open in October last year.