Larrazabal came from an equal-record five shots back to win by a stroke with a final round 66 for a 17-under par tally – one less than his 2014 winning total on the same Munich Golf Course course. 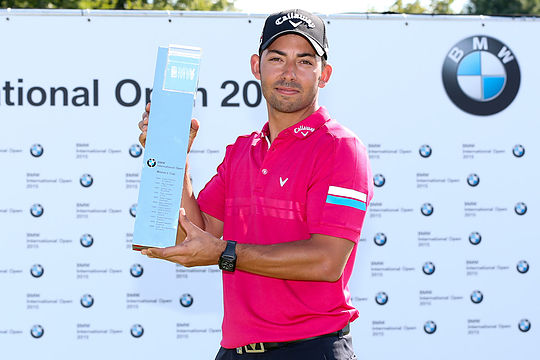 World number seven Henrik Stenson came from seven shots behind to take second place with a round of 65 for a 16-under par total.

Seven years ago this coming week Scotland’s Colin Montgomerie went to the last day of the 2008 French Open in contention not expecting to be upstaged by the then relatively unknown Spaniard.

The Scot was asked at the time what he knew of the son of a Barcelona-born fisherman.

It was pointed out to Monty: “Pablo Larrazabal”. Monty responded: “Well, let’s just call him Pablo for the time being.”

And then when Larrazabal went on to capture the first of now four Tour titles Monty commented: “Well, at least he doesn’t design golf courses.”

Larrazabal now returns to Versailles for this week’s French Open brimming with confidence having cut another European Tour superstar down to size in Sweden’s Henrik Stenson to capture a second BMW International Open title in four years.

“It feels awesome to win again and from my four victories this is the one when I had control of my emotions and all aspects of my game,” he said.

“But then I read an article that said I am becoming a bit of a ‘giant killler’ because when I won in France, and one of the biggest tournaments we have, I beat Montgomerie into second place and then when I won here in 2011 I beat Sergio Garcia in a play-off, and last year I won in Abu Dhabi beating Rory McIlroy and Phil Mickelson.”

“This time it was Hernik Stenson and he was the highest-ranked player here this week so it can’t get any better”.

And adding to Larrazabal’s joy is his impending marriage in August to the stunning Gala Ortin – his girlfriend of over 10 years.

“Getting married to Gala is going to be special but then really she has been my wife for many, many years.”