American Nate Lashley never lost his stranglehold on the Rocket Mortgage Classic and went wire-to-wire to claim his first PGA Tour victory at the inaugural event at Detroit Golf Club.

Lashley fired a 2-under-par 70 and finished at 25-under-par, beating Doc Redman by six strokes. The victory earned him a cheque for US$1,314,000, plus a spot in the British Open in a fortnight, and next year’s Masters, US Open and PGA Championship.

It was quite the turnaround for the 36-year-old journeyman, who qualified for the tournament as the third alternate and enter the week ranked 353rd in the world.

To say Lashley is a true journeyman would be an understatement – he earned his PGA Tour card last season on the Korn Ferry Tour at age 34.

Progression as a professional has seen time away from the game balancing real estate interests with playing golf.

On top of all that, for over fifteen years, Lashley has had to endure the tragic memory of losing his parents and his girlfriend in a fatal plane crash after watching him play in a college tournament.

“It’s a career-changing event getting a win out here,” said Lashley. “It gives you job security, it gets you into majors, you have two more years to basically get more comfortable and play better golf. So you really can’t put into words how much this means and it’s just huge for my career.”

Winning on the main tour certainly has been a work in progress for Lashley with an accumulation of victories on the Gateway, EGolf and Dakotas mini-tours before a three-win season on PGA Tour Latinoamerica in 2015.

A win two years later on the Korn Ferry Tour (Corales Puntacana Resort) made him a PGA Tour rookie last season at 35. 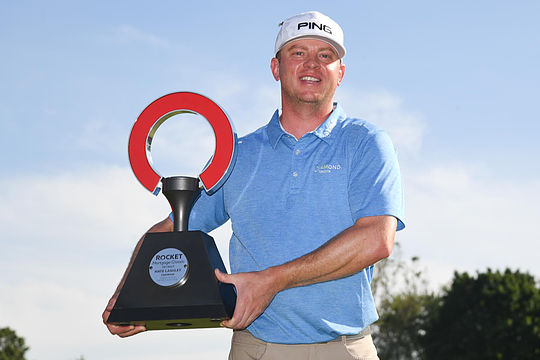 “I’ve been through a lot,” said Lashley. “It took a lot of years for me to get over my parents’ death, for sure. It was mentally holding me back for a long time.”

Lashley will now play at Portrush in The Open next month and need not worry about Monday qualifiers. Consider it a culmination of sorts, of a journey that began with tragedy and has been defined by it ever since.

Lashley is the 10th first-time winner on the PGA Tour in the 2018-19 season. At 36, he is the oldest, as well. Lashley also became the first alternate to win on the PGA Tour since Vaughn Taylor at the 2016 AT&T Pebble Beach Pro-Am, and moved from 132nd all the way to 40th in the FedExCup standings.

Cameron Smith finished the best of the Australians in a share of 29th position at 12-under. Matt Jones missed the cut finishing at 2-under, along with Rod Pampling, Curtis Luck and Cameron Davis.