Last Aussies bundled out of US Amateur

Ryan Ruffels’ run at the US Amateur has ended at the hands of American Todd Mitchell who accounted for our top-ranked Australian male amateur and world number 9 with a 3&2 win in the round of 32 today at Olympia Fields Country Club, south of Chicago.

Mitchell, 37, and ranked 2528th under the R&A World Amateur ranking played stellar golf throughout the match and was effective in shutting down any opening when Ruffels looked set to pounce. 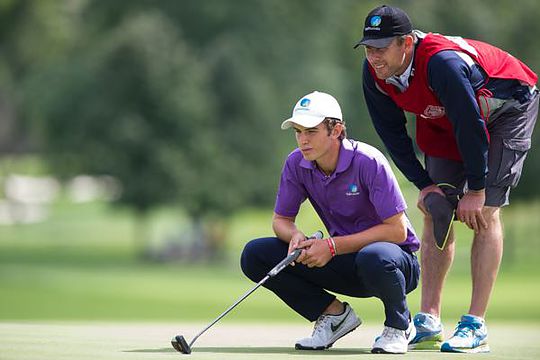 After two holes Mitchell, who lists his occupation as an Insurance Agent and is married with two children, had a 2-up advantage over Ruffels. By the turn he had moved to be 4-up.

It wasn’t the start the Aussie had planned and it proved problematic with Ruffels on the back foot trying to apply the pressure to Mitchell for the majority of the match.

Ruffels played gallantly throughout the day and when he dropped a birdie putt on the 363 metre par 4, 13th, and followed with a stellar approach into the 14th green over trees for a win, the deficit had been erased to 2-down. The momentum had swung in the match and Ruffels looked poised to strike.

But as had been the case earlier, Mitchell to his credit refused to give in.

A couple of lucky bounces off trees and a majestical short game had provided an impenetrable fortress for Mitchell’s margin and on the 16th the American was again lucky after hooking his approach well left of the green to see his ball finish pin high on a flatten area where spectators had walked the heavy surrounding rough with plenty of green to work with.

A smart chip to just a metre from the hole all but sealed Mitchell’s victory.

Ruffels was left with a 15 metre birdie putt to win the hole and set the match 1-down with two to play, yet came up short. Ruffels’ par putt missed and with that his chances of winning the US Amateur.

Yet you cannot help but feel Ruffels had been unlucky in his match. On the 417 metre par 4, 8th, Mitchell’s drive hit a base of a large tree hard and was set to be going into the deep rough, only to bounce back to the fairway fringe. He then went onto make birdie to win the hole to be 4-up through 8. To the American’s credit he capitalised wonderfully with his opportunities throughout the match.

Overall, Ruffel’s international ‘tour’ has seen great results in the UK, France, Canada and in the US, where he made the quarter-finals of the Western Amateur and secured a top-10 finish this week in the stroke play qualification at the US Amateur.

Maverick Antcliff, originally from Brisbane but now playing out of Augusta State, was the other Australian to survive the round of 64 but was defeated Maverick McNealy, 5&4.