It’s been over four years since Padraig Harrington won on either the PGA or European Tour but he’s back in the winner’s circle after capturing the PGA Grand Slam of Golf despite being a last minute replacement for the event in Bermuda. 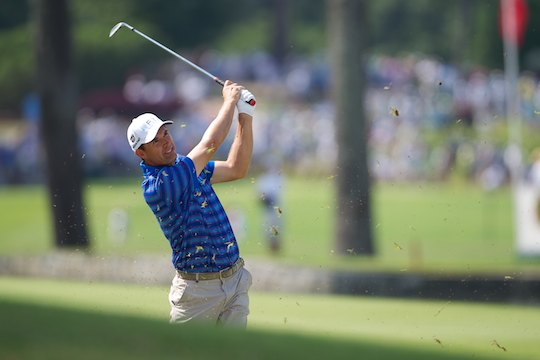 “It’s a fantastic tournament. It’s an enjoyable tournament. Even if I finish fourth here, I’d be quite confident that I made the right decision. It is a bonus to come and win, no doubt about it.

“And it was unfinished business for me, having lost in two playoffs, it was nice to come back and win it now.”

Keegan Bradley, the defending champion, who secured his place in the field when PGA Champion Rory McIlroy pulled out, matched Harrington’s four-under 67 to finished tied third with Masters winner Bubba Watson, who only managed an even-par 71.

Harrington, winner of the Open Championship in 2007 and 2008, then added the PGA Championship later in the summer of 2008, started the final round with a two-shot lead over Watson, but it came down to Harrington and Simpson.

Harrington parred his first four and Simpson birdied the par-3 third to get within two. Both players birdied the fifth and Simpson cut the margin to a stroke with a birdie at the seventh.

The pair both birdied the par-3 eighth, then Harrington essentially put the tournament out of reach after the turn.

Harrington birdied three in a row from the 11th to get to 10-under par. Simpson birdied 14 and 17, but was two behind thanks, in part, to Harrington’s four consecutive pars from the 14th.

Harrington held a 2-shot lead on the 18th and bogeyed the hole. All it meant was his margin of victory was a stroke.

“It’s very important to win and there’s no doubt about it,” added the Dubliner.

“And the feelings I would have out there, you know, in the last‑‑ today and the 18 holes is the exact same feelings you would have on a Sunday because I have a two‑shot lead and I’m trying to protect the lead somewhat.”

“I knew I need to make some birdies to move forward. It’s exactly like any Sunday. You know you don’t want to mess up and yet you still have to play some good golf.”

Simpson was the lone player in the field to post a bogey free round over the two-day event.

“I’m really encouraged with how I played today,” said Simpson. “Wish I could have probably had that shot back on 18, the iron shot. I just came out of it. But overall, good day, and you know, it’s been a great week.”

Harrington, who collected a first prize of $600,000 for the victory, had given up competing in this week’s BMW Masters event in Shanghai to compete in Bermuda.

He will now head to China to tee-up in next week’s $US 7m WGC – HSBC Champions event.