26-year-old Jon Rahm has made two incredible putts at the 17th and 18th holes to win his first major title, move back to World No.1 and become the only Spaniard to take home the title in its 121-year history.

Rahm, who was playing three groups behind the final grouping of Louis Oosthuizen and Mackenzie Hughes, sunk a mammoth 8-metre birdie putt at the par-5 18th hole for a 4-under 67 to eventually leave South Africa’s Oosthuizen agonisingly short of a second major win and what would have been his first in 11 years.

“I’m a big believer in karma, and after what happened a couple weeks ago [his COVID withdrawal from the Memorial] I stayed really positive knowing good things were coming,” said Rahm, who was also celebrating his first Father’s Day with new son, Kepa.

“I have a hard time explaining what just happened because I can’t even believe I made the last two putts, and I’m the first Spaniard ever to win a U.S. Open. This was definitely for Seve. I know he tried a lot, and usually we think a lot about him at the Masters, but I know he wanted to win this one most of all.”

Oosthuizen now has six second-places in majors including two at the US Open and PGA Championships and one a piece at the Masters and Open Championship.

Still, the 38-year-old only has himself to blame. He stood on the par-4 17th tee at 5-under and just one shot behind Rahm.

The South African had previously recorded a birdie and two pars at the 17th and had carded nothing worse than a birdie at the 18th all week, which makes the decision to not play it safe with just two make-able holes to go all the harder to fathom.

What’s In The Bag: Jon Rahm

“I feel like I had my shots, I went for it, and that’s what you have to do to win majors. Sometimes it goes your way, and other times it doesn’t.”

Harris English quietly played his way into outright 3rd with a final round 68 while Italy’s Guido Migliozzi, two-time US Open champion, Brooks Koepka and Collin Morikawa snuck home for a share of 4th.

With 9 holes to play, both Rory McIlroy and defending champion, Bryson DeChambeau were also well in contention before a string of bogeys saw both players fall away. While McIlroy did enough to finish in a share of 7th, DeChambeau was not so lucky.

The 2020 US Open champion opened his account with two birdies but all hell broke loose on the way home. Back-to-back bogeys came at the 11th and 12th holes before a double at the par-5 13th. However, the 27-year-old saved the best for last, recording a quadruple-bogey at the par-4 17th to fall into a share of 26th at 6-over. 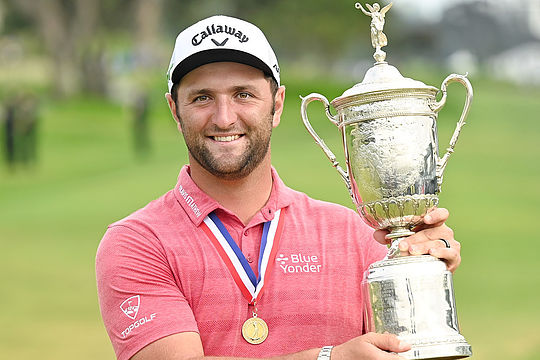 Of course, DeChambeau was quick to remind us that there was no implosion…just a bit of bad luck. He went 34 holes without a bogey before the “bad luck” struck as he made his way through the last nine holes of the tournament.

“I didn’t get off the rails at all. It’s golf. People will say I did this or did that, and it’s just golf. I’ve had plenty of times where I hit it way worse than today and I won.”

“It’s just one of those things where I didn’t have the right breaks happen at the right time. I could have easily gotten to 7-, 8-under today. I just wasn’t fully confident with the golf swing and just got a little unlucky in the rough and a couple other places.”

Adam Scott lead the way for the Australians finishing in a share of 35th place following a final round 2-over 73. Wade Ormsby (T40), Marc Leishman (64) and Matt Jones (T65) were the only other Aussies to make it through to the weekend.

Cameron Smith was unlucky to miss the cut by a stroke and finished at 5-over with Brad Kennedy (+10) and Steve Allan (+17) rounding out the Down Under field.

The next, and last, major on the calendar is the Open Championship at Royal St. George’s starting on the 15th July. The event was cancelled last year due to COVID with the 2019 champion, Shane Lowry, enjoying two years as the reigning champion.

Next up for the PGA Tour is the $7.4 million Travelers Championship starting this Thursday.