Rickie Fowler heads to this week’s Open Championship in the best possible form after capturing the Aberdeen Asset Management Scottish Open at Gullane for his second victory of the season.

The 26-year-old birdied three of his closing four holes for a final round two under par 68 for a 12-under par tally. 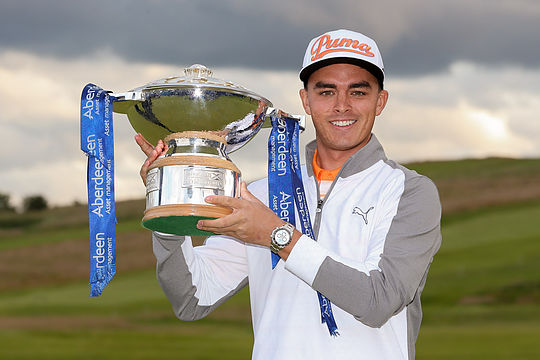 “Phil [Mickelson] mentioned to me win this and there’s a good chance you win next week (at the Open Championship) so I had to take care of business,” said Fowler.

“I don’t know what’s so special about links golf but it’s my favourite. The golf course can play so different day after day and it presents a new challenge.”

It is only the reigning Players Championship title-holders second victory outside of the US after capturing the 2011 Korean Open and his fourth as a professional.

Fowler, who was eighth at this tournament a year ago, is also the second American in two years to capture the Scottish title after Phil Mickelson won at Castle Stuart in 2013 and then went on capture his first Open Championship at Muirfield.

“I will have a bit of time tonight to let it sink in and get right back at it next week.”

“This is a big win. I had a couple of missed cuts after winning the Players, which was disappointing, so it feels good to get back on form.”

Jacquelin along with England’s Daniel Brooks and Sweden’s Rikard Karlberg earned places in this coming week’s Open Championship in finishing the leading three in the top-10 finishers not already qualified for The Open.

With Jordan Spieth winning the John Deere in a playoff on the PGA Tour this week, the young guns will be taking the stage front and centre at this week’s Open Championship.

John Senden was the only Aussie to make the cut finishing T22 at 6-under.