Sepp Straka has become the first Austrian to win on the PGA Tour following a late Sunday charge to take out the Honda Classic.

Straka, down by five shots entering the final round, shot a 4-under 66 on Sunday to finish at 10-under-par and one stroke clear of Ireland’s Shane Lowry. Straka was 4-under in his final ten holes, 3-under over the final five, as he overtook the field to match the biggest come-from-behind win this season.

The 28-year-old sealed the victory timing a long eagle putt to within tapping in distance on the 18th as torrential rain lashed the course.

“It’s awesome,” said Straka. “I had no idea where I stood. I knew so many things could happen on the back nine. Most of it was out of my control, so I tried to keep my head down and hit good shots. I knew I could win because there was only one guy ahead of me. Strange things happen out here.”

Before Sunday, Straka’s best results was a third in the 2019 Barbasol Championship, and leading after the first round of the 2020 Summer Olympics where he eventually finished in a share of 10th position.

The turning point in the tournament came at the par-4 16th where Straka nailed a birdie putt from off the green. It tied him at the top with Lowry for the first time to set up a birdie opportunity on the 18th where Straka bombed a 300 metre drive to be able to reach the green and two-putt for the win. 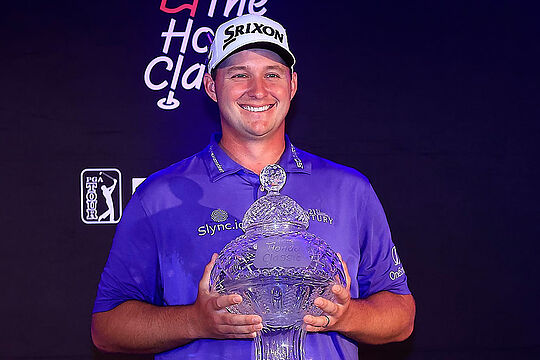 Sunday’s victory has also secured him a start at The Masters, an exemption on the PGA Tour through to the 2024 season and starts at the PGA Championship, Sentry Tournament of Champions and invitational events.

The win for Straka comes off an impressive recent run in which he’s finished in the top-20 at the Farmers Insurance Open and the Genesis Invitational.

Brett Drewitt was the best of the Australians finishing in a share of 55th position with a final round 68 moving him thirteen places up the leaderboard.