Late call at Wells Fargo pays off for Ernst

With a 2-under-par 70 in the final round, Derek Ernst and David Lynn finished at 8-under, a stroke ahead of Phil Mickelson in the Wells Fargo Championship at Quail Hollow Club.

Mickelson with bogeys on two of his last three holes saw his changes of claiming his 42nd PGA Tour victory slip from his hands after being in control for most of the week. 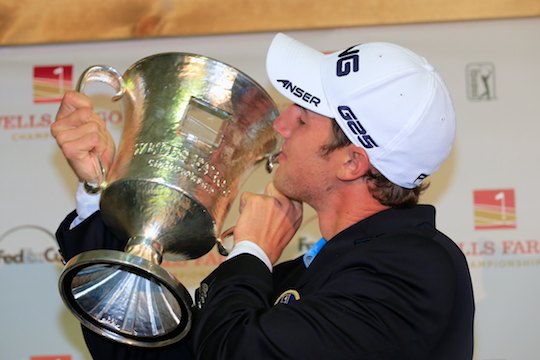 Ernst secured his first PGA Tour win when he put himself into a playoff with a birdie from 4 feet on the 18th. He then two-putted for par on the same hole to beat Lynn on the first playoff hole.

“This feeling is unbelievable right now,” said Ernst, who had played only eight PGA Tour events before his maiden victory.

Ernst was ranked 1,207th in the world rankings at the start of the week and was headed to Georgia to play in a Web.com Tour event but got the call to play the Wells Fargo.

He had also made only two cuts this year, which led to being the fourth alternate.

“All week long my swing felt good, mental game was good. The big thing was, what I said all week long is, I got out of my own way, and it paid off for now.”

Lynn made a total mess of the sudden-death shoot-out after he hit his tee shot into deep rough on the left, put his second shot into a greenside bunker on the right and overshot the green when chipping out. His chip ran eight feet past the cup, allowing the American to win with par.

Victory sees Ernst with a US$1.206 million check and a two-year exemption on the Tour.

It also gets him into The Players Championship next week and he qualifies for two World Golf Championships, the PGA Championship, the Tournament of Champions next year at Kapalua and the Masters next April.

“The money is money, it will come and go,” said Ernst, who toured Australia as an amateur playing the Australian Masters of the Amateurs in 2012.

“But winning and having a job and playing out here for the next two years, that’s what I want to do. I want to play out here, so that is the best part.”

As a 22-year-old rookie who had missed five cuts out of his last seven events, Ernst is a fairytale success.

He became the seventh player this year to win for the first time on the PGA Tour.

In the process Ernst went from Q-School to the winner’s circle in five months and before Sunday had made less than $30,000 after missing five cuts in his first seven starts, with his best finish just inside the top-50 last week at the Zurich Classic.

Lee Westwood and Robert Karlsson finished in a tie for fourth, a stroke behind Mickelson.

Scott Gardiner and John Senden were the best of the Australians finishing in a tie for 22nd position at 2-under with Robert Allenby finally making the weekend to secure a tie for 27th position.

Geoff Ogilvy finished at 1-over par for a tie of 38th position with Rod Pampling a stroke behind in a tie for 43rd. Stuart Appleby and Steven Bowditch also made the weekend.