South Africa’s Branden Grace scored a sensational eagle at the par-four 16th hole to propel himself to victory over a tightly bunched field at the Qatar Masters on Sunday.

The 26-year-old shared the overnight lead with three others but his closing 66 saw him finish on 19-under par and victory by one stroke from Scotland’s Marc Warren. Warren narrowly missed for a birdie on the last hole to force a play-off. 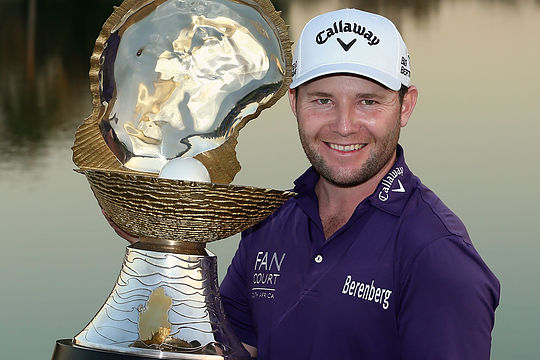 Austria’s Bernd Wiesberger shot a round of 68 to finish two adrift of the winning mark, while Englishman Eddie Pepperell shot a 67 to finish in fourth spot on 16-under par.

At the 16th, Grace nailed his driver to within five feet of the hole to leap ahead and with another critical birdie at the last, Grace won his sixth European Tour event to add to the Alfred Dunhill Championship he won in December.

“Today was good. I started with a nice birdie and the round didn’t really go my way from there, but I just stuck to my routines, stuck to my guns and one thing led to another.” Grace said. “One good swing led to another one and I made a couple of birdies coming in, which was a great bonus.”

“It’s not actually my favourite tee shot (at the 16th), especially with the wind off the left. I managed to hit a great shot and got it up in the air, which allowed for the soft bounce, and managed to get it to go five or six feet short of the flag.”

For Warren, his hopes took a downward turn after finding water en route to a double bogey on the par-three eighth, although to his credit the Scot fought back valiantly and pushed Grace all the way with his round of 67.

“I wish next week started tomorrow, after playing a final ten holes like that. It’s a second place but it’s not like I have made any mistakes coming in, and it was exactly the opposite to be honest.”

“It was kind of foot down and go forward, and I felt like I was swinging well the last few holes. I was going at flags and the putts were going in, so overall it was a really exciting day to be honest.”

Richard Green and Brett Rumford were the best of the Australians, tied for 38th place at five-under, while Wade Ormsby was well back in 72nd.