Law shoots the lights out in European Tour return

There hasn’t been too much good news coming out of the European Tour lately, however, that all changed this week with the first of six events kicking off in the UK.

It was Scotland’s David Law, who took the first round honours following a spectacular birdie blitz at the €1,000,000 Betfred British Masters. 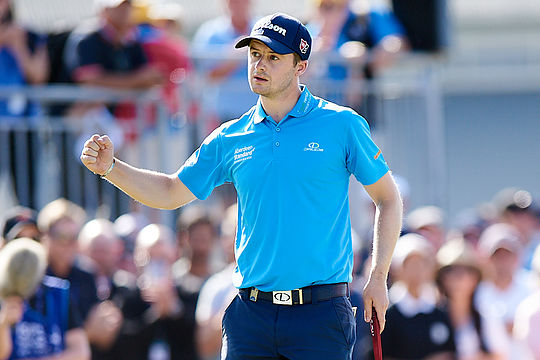 Law, who won the ISPS Handa Vic Open in 2019, fired off seven birdies in the space of eight holes to card a 7-under 64 and a one shot lead over England’s Oliver Fisher and Garrick Porteous and Italy’s Renato Paratore.

“I wasnt really sure what to expect coming into today after the long break but I was delighted with that,” said Law.

“It’s a little strange obviously but the tour have done a fantastic job, so far it’s gone really well, the club have hosted this really well.”

“It’s a new time for us, for everyone, we’re all learning and we’re all getting used to it but on the whole I think the whole week has been very positive.”

Tournament host and the the top-ranked player in the field, World No.34 Lee Westwood signed for a 1-under 70.

“It was a bit of a struggle…I didn’t really have control of my swing.”

“I mis-clubbed a few times, which is probably not acceptable being a member and the touring pro here. But I putted really well and ground it out,” said Westwood.

Jake McLeod and Scott Hend were the best of the Aussies in a tie for 29th on 2-under with Jason Scrivener doing well to card a 1-under 70 after flying in from his short stint in the Memorial Tournament last week.

Scrivener sits alongside Maverick Antcliff in a share of 50th place while Min Woo Lee (T100) has a lot of work to do following an opening round 2-over 73.