England’s Bronte Law has taken out the Dubai Moonlight Classic with an impressive final round 8-under 64 to claim her maiden Ladies European Tour victory.

Law needed to produce an eagle on the 16th hole to secure her one shot victory over Mexico’s Maria Fassi on a tense final night on the Faldo course at Emirates Golf Club. 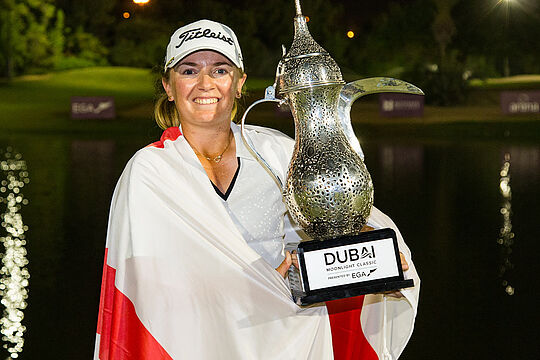 Law began the final round on 7-under par, three shots behind the joint overnight leaders Fassi and Sweden’s Jessica Karlsson with her final round including six birdies and that eagle to finish with a 15-under-par total.

“It is hard to put into words,” said Law.

“I had said to my caddy we need to try and shoot seven under, and we went out there and shot one better. It’s a bit surreal actually. I don’t know what I’m feeling but I love Dubai and I love coming here. I really enjoyed my experience here last year and I just love coming here and playing something different.”

The victory was her second professional title after winning the 2019 Pure Silk Championship on the LPGA Tour.

Fassi claimed second place with a total of 14-under-par after carding a final round of 4-under-par 68. It was her first tournament under lights and she blasted out of the blocks with an opening round course record of 63 followed by a second round of 71 and took plenty of positives away from the week.

“I think I played good golf all week,” said the 23 year old. “It’s never nice to lose, but it’s nicer to lose that way when you played really well.”

“Shooting 8-under, Bronte very much deserved to become champion. I am very happy with the way my game has been the last few weeks and I really enjoyed my first experience here in Dubai. I’m looking forward to coming back next year.”

Germany’s Esther Henseleit ended the tournament in third place, three shots off the lead after rounds of 72, 66 and 66.

Stephanie Kyriacou lead the way for the Aussies claiming a share of 11th pace alongside Jessica Karlsson on 8-under. Western Australia’s Whitney Hillier finished at 4-over in equal 47th.