The European Tour regular finished on top of the qualifying leaderboard at Prince’s Golf Club, which sits just north of the Open Championship venue on Sandwich Bay. 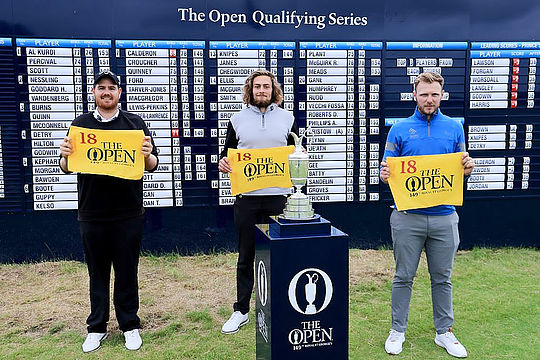 Digger, as he’s known to friends, fired rounds of 70 and 71 to finish on 3-under 141, which was enough to secure one of just 12 places available across four venues in England.

“I’m over the moon. I’ve never played a Major and it’s been a goal of mine for quite a while…since I was a little kid really watching golf and seeing the best players in the world play in Majors. To be able to qualify for this it is amazing,” said Lawson.

“You try not to think about it and just try and stay in the moment, which I thought I was really quite good at today. It’s good to look over and see Royal St George’s…and now obviously I can go over and play it – which will be nice.”

And Lawson wasn’t the only one excited about the result. His partner Ali Orchard, who works as a golf coach on the Gold Coast summed up what the result meant to the couple.

“We’ve been grinding so hard away from each other during this Europe stint and you’ve been grinding your whole LIFE for moments like this. Qualifying for the 149th @theopen. You deserve this now more than ever! I love you,” posted Orchard.

Austin Bautista was the only other Australian to play at Prince’s Golf Club but missed qualifying (2-under) following rounds of 71 and 78 for 5-over.

Also at 5-over, Josh Greer finished well short of the 6-under qualifying mark at West Lancashire, while New Zealand’s Daniel Hiller finished on top of the leaderboard at Hollinwell where Queensland’s Elvis Smylie was listed as retired.