Stephen Leaney showed he still has what it takes to win claiming the Nexus Risk TSA Group WA Open.

Played at Royal Perth Golf Club, Leaney fired rounds of 64, 71, 69, 69 for a tournament total 15-under 273 to secure a one shot victory over Callan O’Reilly, who missed a six foot birdie putt on the 18th to force a playoff. 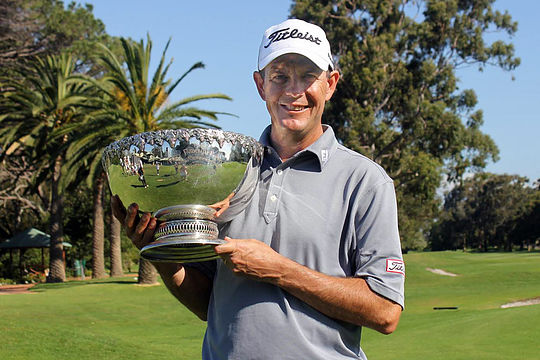 This is Leaney’s 14th career victory and comes 13 years after his last win at the 2004 Western Australian Open.

“It’s been a long day; it’s been a long 13 years I think since I won a golf tournament. I just tried to stay in the moment all week this week. That’s probably as good as I’d done for a long time. I never got ahead of myself and stuck to the task. Good things happen when you do that,” said Leaney.

“I wasn’t watching the leaderboard, I was just trying to play the golf course the best way that I can. I made a bad swing on 14 and it didn’t hurt me because he (O’Reilly) made bogey as well.

“It’s always hard to win golf tournaments, I’ve won a lot and it still doesn’t get any easier. You still go through the same emotions. I was very nervous the last four or five holes.”

Having a strong affinity with the tournament, Leaney has now won the title six times, equalling Terry Gale for the most victories.

“It’s been my favourite tournament. It was the first one that I played in. I think I won the Terry Gale Cup as the leading amateur about four times, to win it six times is great,” added Leaney.

“I know I tie Terry but I think a couple of wins that I had were only 36 holers so it probably needs an asterisk next to my name and Terry can have the six out by himself.

Now 48 and eyeing a tilt at the Champions Tours, Leaney believes today’s win is vindication for his hard work off the course.

“My fitness guys back at SA Redbacks. Tim Nielsen really kicked me up the butt a couple of years ago and said if you want to turn 50 with a head of steam you’ve got to get into the gym and work out,” said Leaney.

“It’s paid off. It’s nice when you do the work and you suffer in the rain and good things happen when you work hard.”

“It’s just validation that I can still win golf tournaments. I haven’t really done that well in the last five or six years. I did play well a few times last year but was never really in contention.

At 14-under the card New South Welshman Callan O’Reilly finished outright runner-up with West Australian Michael Sim two shots back and outright third after shooting a final round 66.

Rounding out the top-5 on 10-under the card are Michael Choi (VIC), Taylor Cooper (NSW), James Marchesani (VIC) and the leading amateur David Micheluzzi (VIC).

Thanks to his win today and earning AU$15,000, Stephen Leaney is 37th on the ISPS HANDA PGA Tour of Australasia Order of Merit.

From Perth the ISPS HANDA PGA Tour of Australasia now heads east to The Brisbane Golf Club for the Isuzu Queensland Open to be played from 26-29 October.