Aussie Min Woo Lee has won the US Junior Championship with a 2&1 victory over Texan, Noah Goodwin in Ooltewah, Tennessee.

Lee becomes the first Australian male to claim the title as the 17-year-old West Australian overcame a nervous 50 minute weather delay before sinking the 1-metre championship putt for the title. 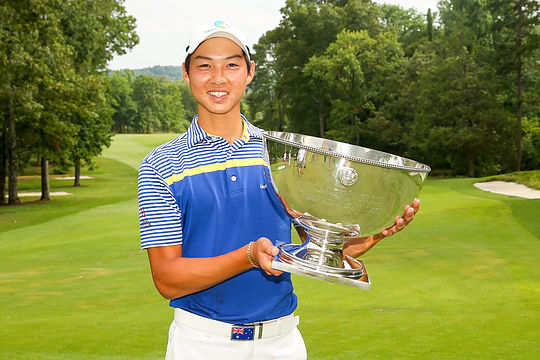 “It feels great,” said Lee following the victory. “I’m down in history on the USGA Junior trophy, so it feels really good. It’s probably the best I’ve ever felt.”

Lee became the first male Australian in 10 years to win a USGA title, the last being Geoff Ogilvy at the 2006 US Open.

“It’s a dream come true for me. I’ve always wanted to win this tournament. I was in good form coming into it. I knew I had a good chance.”

“It feels great to win and be on the trophy with names such as Tiger and all the great names.”

The championship match saw neither player enjoy more than a 2-up lead throughout the 35 holes. It also included a pair of afternoon weather delays totalling 83 minutes.

“I was kind of tired just before the rain delay, and that kind of eased me down,” said Lee.

“I knew it was getting close to the championship. When I was out there and me and Reed were down, a little down just because we lost the hole, it’s kind of like eye opening because it’s a US Junior.”

“It’s the biggest junior tournament in the world. It means a lot.”

Lee entered the matchplay segment as the number 2 seed and following today’s win shares a unique position with his sister, touring professional Min Jee Lee, as being the first brother and sister US Junior champions in USGA history.

It was a great week for the Australians with Fred Lee, also from Western Australia, progressing to the Quarter Finals.