Trailing throughout the day, Hayley Bettencourt grounded out a 1-up victory on the 36th hole against Mount Lawley’s, Hannah Green. 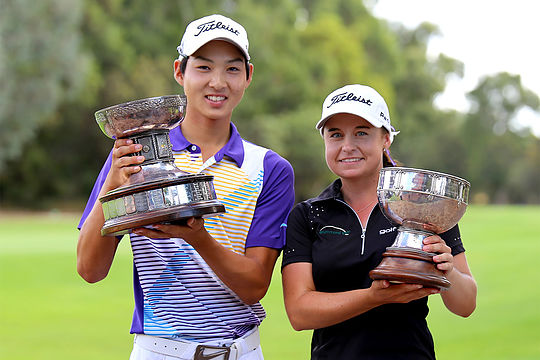 Min Woo Lee needed two extra holes to account for Kiran Day from Cottesloe, who lead throughout but succumbed to a superb Lee comeback during the closing stages of the final.

Lee was trailing with a four hole deficit with five to play, but dug deep winning three straight holes to get within one with two holes to play. Lee then won the 36th hole to tie the match with a birdie and force extra holes.

While Lee’s win is a testament to his nerves of steel, Day played incredible golf throughout the tournament including disposing the Number 1 seed, Curtis Luck, in the Semi-Final.

“I was just saying to play my best,” said Lee. “Kiran was playing so well so I knew I had to dig deep and try to pull through.”

“I just stuck to my game play and it just turned out well for me.”

It is the first time the ‘Lee’ name has been engraved on the Men’s Amateur Trophy, but he now joins his sister, Minjee Lee, who has three state Amateur wins to her name.

For Bettencourt it was her second consecutive Western Australian Amateur title which follows from good results on the ALPG Tour, including a 15th place at the Victorian Open. Bettencourt now says turning professional may be on the cards in the near future.

“It’s pretty much chatting to a lot of people who’ve been there and done that in the golfing world,” said Bettencourt who won the 2014 SA Rene Erichsen Salver to add to her her win at the 2012 NSW Amateur title.

“I’ll decide if I go on to play a bunch of amateur events in Europe and America, or just go professional and make decisions from there.”