A runner-up on the Japan Golf Tour last week, Lee overcame an early bogey to bounce back with an eagle and five birdies on Sunday to win the OneAsia event by four shots from compatriot Meenwhee Kim, who also carded a 66 in the final round. 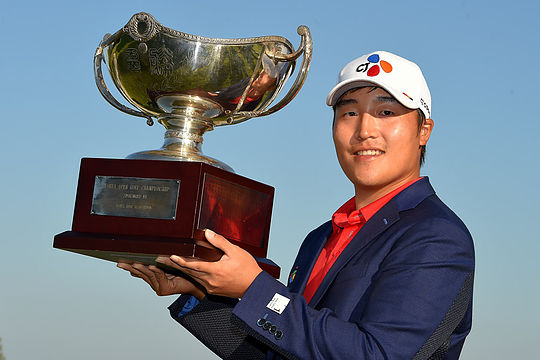 “It is an incredible feeling,” Lee said, who finished the event at 13-under 271 and earned close to US$250,000 for his second professional win.

“I have been playing well recently and could not have found a better time to find my form. The Korea Open is our biggest event and it is a great honour to win.”

Fellow Koreans Wang Jeunghun (70) and Lee Dongmin (71) continued the local domination of the major placings by finishing in a tie for third, two shots further back.

Queenslander Steven Jeffries carded two double bogeys to cool any hopes he might have harboured of mounting an unlikely final day challenge.

The Fiji International champion had led the tournament after two rounds and despite his stumbles on the final day, still managed to finish the championship in a highly respectable tie for 5th place alongside Korean Moon Kyongjun at four-under par 280.

Australian Masters champion Nick Cullen was the next best of the Australians in a tie for 17th at even par, while Stephen Dartnall was two strokes further back in a tie for 22nd.

The next event on OneAsia schedule is the AU$1 million Fiji International at Natadola Bay from October 15-18.

Jeffress will defend the title he won in handsome style last year although his challengers will be thick on the ground, headed by U.S. star Matt Kuchar who will be making his first trip to Fiji.