Golf fans around the world have long admired the talent of Minjee Lee but there is a new Lee to take note of, her little brother Min Woo.

Playing in the TX Civil and Logistics WA PGA Championship Min Woo Lee fired a course record 8-under 64 at Kalgoorlie Golf Course to lead after the first round. 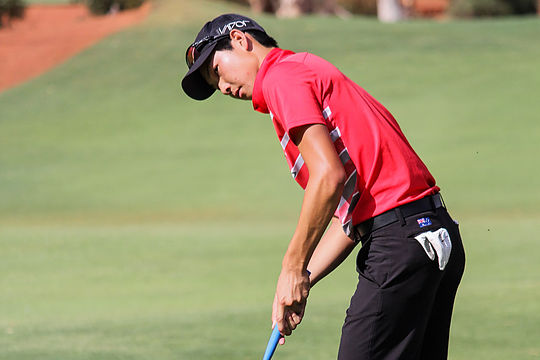 Min Woo Lee putted his way to a course record 8-under 64 in round one of the WA PGA (Credit: PGA Australia)

Lee will head into the second round a shot clear of his playing partner Jason Norris, R.J. Caracella and Daniel Nisbet.

“I am pretty excited, that is one of my lowest rounds, and it feels awesome getting a course record,” said Lee.

“It’s not much of a pressure thing, I just think of it as playing with mates. I played with Norrey, he is a good bloke and we just played like a normal round, a practice round.”

In just his second tournament as a Professional, Antonio Murdaca is 6-under the card after the first round as is West Australian Brody Ninyette. The pair round out the top-5 on the leaderboard.

Tournament drawcard Brett Rumford fired 5-under 67 in his first tournament since making the cut at The Open. He is joined by Andrew Evans on the leaderboard in a tie for 7th.

A group of seven players round out the top-10 on 4-under the card after the first round.