K.H. Lee closed with a final round 63 to edge out local favourite Jordan Spieth to defend his title at the PGA Tour’s AT&T Byron Nelson Championship in Texas last Sunday.

Lee, 30, became the first player to defend his title at the AT&T Byron Nelson since Tom Watson in 1978 and 1980 and joined exclusive company alongside a couple of other Hall of Famers including Sam Snead in 1957 and 58 and Jack Nicklaus in 1970 and 1971.

Lee began his title defence in style firing 64 in the first round and after scores of 68 and 67, sat four back of Sebastian Munoz heading into the final round.

On Sunday Lee came out firing with an eagle at 12 after he nailed his second shot from 205 metres at the par-5 to within a metre. He drained a 2 metre birdie putt on the 13th and his birdie at the last sealed the result finishing at 26-under and a stroke in front of Spieth, who closed with a 67.

Lee was ecstatic with his win following what he described as an ordinary previous twelve months.

“Hopefully this season will be better than last year,” said Lee. “Last year I missed the cut at the PGA Championship. So my first goal is next week play well, hopefully make the cut.” 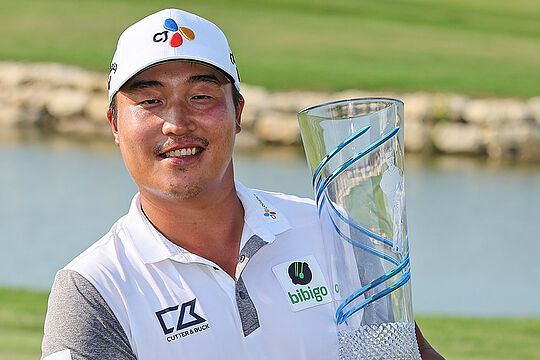 Spieth started the fourth round in the final group, one stroke off the lead held by Munoz. Two early bogeys hurt his chances, yet a string of birdies over the closing nine kept the Texan in the hunt but it was not good enough with Lee torching the layout in a bogey-free round.

“I love playing at home, I would love to win it some day. I had a good chance here…it would be nice to close one out.”

“But it was a good week, good momentum into next week [for the PGA Championship], last two starts being a win and a second, but this one will sting just a little bit just looking back on the day.”

“I shot 5-under, wasn’t playing easy today and a guy went out and shot 8-under right in front of us. So sometimes that happens.”

The event was treated as a ‘warm-up’ for many competing this week at the PGA Championship. Hideki Matsuyama secured a share of 3rd place at 24-under, with Xander Schauffele in a share of 5th, along with Justin Thomas.

Adam Scott finished the best of the Australians in a share of 32nd position, a closing round of 65 moving him twenty-one places up the leaderboard. Marc Leishman and Jason Day shared 51st position to be the other Aussies making the weekend.

The cut came in at 5-under-par with Brett Drewitt and Cameron Percy missing the weekend.