Fijian Sam Lee has battled tough conditions at Moonah Links to hold on to a slender lead following the second round of the final stage of ISPS HANDA PGA Tour of Australasia Q-School presented by Cobra Puma Golf.

In stark contrast to yesterday’s hot scoring, the field was tamed by consistent winds for the entirety of the second round, 3-under was the best score of the day shot by Jordan Mullaney, Harrison Endycott and Adam Stephens. 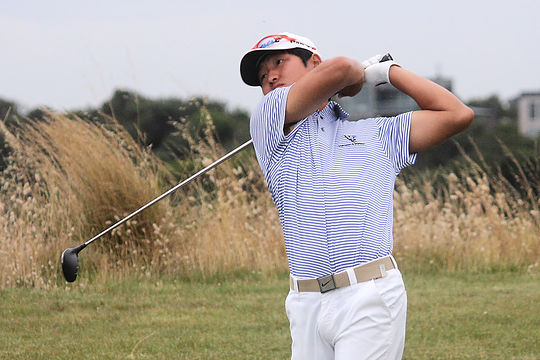 Lee, who started hot in the opening round posting 8-under 64, fought his way to 1-under 71 and holds a one shot lead over the field on 9-under par.

He said the work he’s put in at his home club of Natadola Bay in Fiji has paid dividends when it comes to playing in windy conditions.

“It was tough out there today with the wind but coming from Fiji and playing at Natadola I had mentally prepared for this kind of weather,” said Lee.

“It was quite similar out there today to Natadola so I just stuck to my game plan and went pretty good.”

While disappointed with a bogey on the last hole of his round, Lee said he was happy with his overall round and comfortable heading in to tomorrow.

“I went in to the left trap on the last hole and made bogey so that was a tough way to finish but I played solid from tee to green.”

Jordan Mullaney is one shot back courtesy of his 3-under 69 to be 8-under the card alone in second position.

Holding on to his score of 7-under the card with an even round today was Victorian amateur Anthony Marchesani who remains in third place.

“It was an absolute grind out there today, I didn’t hit too many greens and that obviously made it tough to make birdies,” said Marchesani.

“The wind blew the whole time today compared to yesterday so it was just a matter of taking your time in picking different lines off the tee and things like that.”

Nick Flanagan shot 2-over 74 while Aaron Townsend shot 2-under 70, both are 6-under the card and tied for fourth position.

Harrison Endycott, Campbell Rawson, Tim Stewart, Nick Voke and Anthony Summers round out the top-10 on 3-under par.

The leading group of Sam Lee, Jordan Mullaney and Anthony Marchesani will begin round three off the 1st tee at 9:40am.