The Royal Fremantle member effectively put the 36-hole contest to bed by the halfway mark when he blazed around Gosnells in a six-under 64 to sit down for his lunch with a 6up lead.

It was the sort of start to win any final and while Hatch hardly put a foot wrong that was simply not enough in the face of Lee’s blitz as the US Junior Amateur champion picked up six birdies in an unblemished morning round.

His first dropped shot didn’t arrive until the 25th hole, when Hatch duly clawed back a hole, but by that point the damage was done as Lee soon after clinched the contest 10&8 following yet another arrow like approach into the green.

It ensured Lee joined the likes of Roger Mackay, who earlier this month was one of five inaugural inductees into the WA Golf Industry’s Hall of Champions, as a two-time winner and afterwards he admitted this morning’s round had made the final appear more lopsided than it might have been. 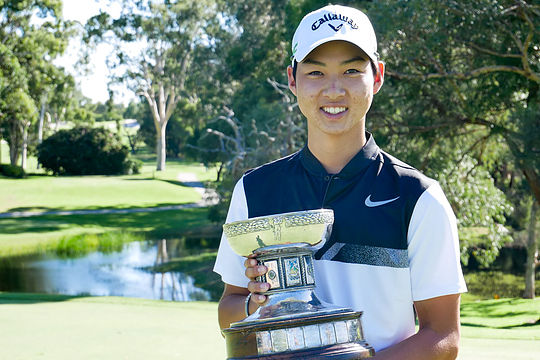 “He (Hatch) is a really good player, he hits it really well and putts really good,” Lee said.

“He was a tough opponent – I just had a really good day.

“It’s always nice to get a name on a trophy and to get it twice with some really good names so it’s a really good moment.”

Lee’s success was further sweetened when he was then named in the WA State Team, which will host the Interstate Series in May, with the 33-year-old Hatch also claiming his place in the eight-man squad.

Lee can also look forward to dinner on the house after a friend bet that he couldn’t get to 10up during the lunch break.

That looked unlikely when he dropped his first shot but he quickly recovered, highlighted by putting his tee shot to the par-three ninth to within inches, as he zeroed in on the title.

“I had to win the last three holes – which I did so hopefully I’ll be getting a nice dinner soon.”