Aussie Min Woo Lee saved his best for last during the second round of the Asia-Pacific Amateur storming home over Royal Wellington’s back nine firing two birdies and an eagle for a 68 and a one stroke lead over China’s Auxin Lin.

Lee, the 2016 US Junior champion, nailed a 20 metre putt on the par 5, 497 metre 18th to snatch the lead from Lin after Lin fired a second round 67 to momentarily hold the lead. 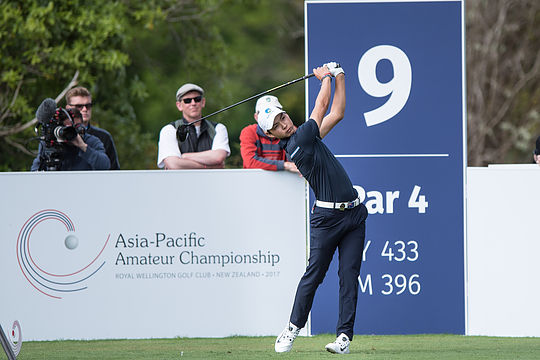 Lee’s driving of the ball was again impeccable, often utilising his ‘stinger’ ball as his ‘go-to’ shot to put himself into position around this tight Royal Wellington layout.

“If you can hit it straight and as long, it’s definitely an advantage having a shorter club in, or even a chip,” said the 19-year-old. “It’s an advantage, but just keep it on the fairway, and you’ll be good.”

Lee, currently ranked 32 under the R&A ranking, said the chance for an invitation to play the Masters and stay at Augusta National’s famous Crows Nest amateur quarters as well as a start at The Open is inspiring and it’s certainly a motivating, if not distracting, factor for all players this week in Wellington.

“I will have to block it out if I want to focus on beating the world’s best amateurs,” Lee said.

“But it’s in the back of your mind and it’s absolutely something you dream about.”

Lee also has to his credit a number of top-10 results in the professional ranks at the Western Australian and Victorian Opens, as well as a share of 35th at the Australian Open last year.

Overnight leader Shae Wools-Cobb carded a second round 3-over-par 74 after opening with a 63 and still remains in the hunt at 5-under-par, two behind Lee in third position.

“I didn’t play out of the tournament today,” said Wools-Cobb. “It was decent, move now onto the next day.”

Behind Lee and Wools-Cobb, Dylan Perry is the next best Aussie moving eight places with a second round 69 after opening with even par 71 to have the British Amateur runner-up in a share of 9th position at 2-under-par.

Travis Smyth, the tournament’s highest world ranked player, fired even par after opening with 1-under to share 15th position along with fellow Aussie Harrison Endycott at 1-under.