Lee, Alexander Levy, Lee Slattery, Joost Luiten, Brandon Stone and Scott Hend, also an Asian Tour member, all had a chance to take the crown, with just one shot separating the six players as the weather-delayed event came down to a day five shootout. 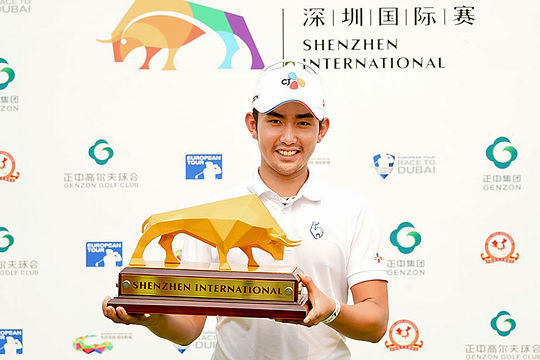 The young Korean began the day in a share of top spot with five holes to play and a birdie on the 16th followed by superb eagle on the next helped him sign for a closing 71 and get to 16 under.

That gave him a two-shot victory over Luiten and Stone and banished the memory of the Maybank Championship Malaysia, where he came into the final round with a three-shot lead but made two double-bogeys in his last three holes to finish in a share of second.

The 22-year-old finished in the top three on his European Tour debut at the UBS Hong Kong Open, jointly sanctioned with the Asian Tour and European Tour, before that drama at Selangor Golf Club and now enters the winner’s circle in just his sixth start.

“I got a big chance in Malaysia but I didn’t make it because I was really, really nervous. Now I made it,” said Lee, who is expected to break into the world’s top-80 following his victory.

“Yesterday I was really, really nervous. We had a lot of break times and then played again so that’s really good for me and I just thought about my golf and then competed until I could do it.

Over nine hours of play had been lost on the first four days due to electrical activity and heavy rain, resulting in the first Monday finish at a regular European Tour event since the 2011 Singapore Open.

Scott Hend finished the best the Australians in a tie for 4th at 13-under and three shots off the pace. Nathan Holman fired a final round 76 to slip back in to 35th place while Wade Ormsby was 54th.