Australian Minjee Lee birdied the final hole to win the LPGA’s Volvik Championship by one shot and celebrate her 22nd birthday in style and just one week before the US Women’s Open.

Lee, who took a two-shot lead into the final round, carded a four-under-par 68 to finish at 16-under for her 4th LPGA tour win. It was the Australian’s fourth career victory to date.

“I’ve been playing pretty solid the whole year, and it’s just nice to have a win,” said Lee.

“It’s is going to be a totally different week at the US Open, so I’ll just try my best and I know I’m hitting it pretty solid and putting it solid, so I think we’ll have a great week,” said Lee. 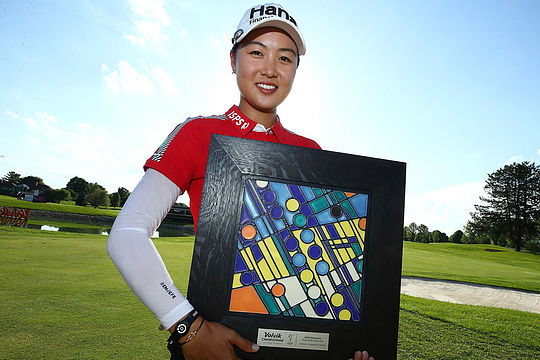 Lee took a two-stroke lead into the final round but by the 15th found herself tied with South Korea’s In-Kyung Kim and needed a birdie to win on 18. After a good drive, her second shot came closer to trouble, yet Lee retained her composure to secure the victory.

“I almost clipped the tree,’” Lee said. “I overcut it a little bit, but it finished out in a good position.”

Lee’s shot came to rest just to the right of the green, and from there, it was a simple chip and putt for the birdie that gave her a one-stroke win.

Lee, who won the 2012 US Girls Championship and the 2013 Australian Women’s Amateur, had three LPGA wins at the age of 20 but had gone 0-for-her-last-38 LPGA starts since winning the 2016 Blue Bay Championship.

Of the other Aussies in the field, Queenslander Sarah Jane Smith closed with a 73 to finish in a tie for 32nd at 6-under, while Perth’s Hannah Green closed with a 74 to finish tie for 63rd at even par.