Mi Hyang Lee of South Korea shot a six-under-par 66 in fine and breezy conditions to win the Aberdeen Asset Management Ladies Scottish Open by a stroke from Australian Karrie Webb and compatriot Mi Jung Hur on a dramatic final day at Dundonald Links in North Ayrshire.

The 24-year-old world number 49, from Incheon, wasted little time as she made six birdies against a bogey in her first nine holes to catch the experienced overnight co-leader Webb, before closing with a birdie on 18 for a 72-hole total of 282, six-under-par.

While Hur set the clubhouse target with her own 66, Webb was two strokes ahead of the chasing pack after chipping in for eagle on the long 14th, but then sensationally dropped three strokes in two holes.

The Hall of Famer uncharacteristically three-putted 16 and then hit her tee shot into a deep pot bunker on the 17th fairway, from where she had to play out backwards, only to find another bunker with her third shot, running up a costly double bogey.

Webb needed to hole a greenside bunker shot for eagle on the final hole to force a play-off, but made an up and down for birdie and a final round of 73.

Lee looked totally shocked as she was told that she had won her third professional title, following the LET’s New Zealand Women’s Open and the LPGA’s Mizuno Classic in 2014.

Webb was extremely disappointed as she thought she had hit the perfect tee shot on 17, but it had kicked into the fairway bunker.

“I bent down, picked my tee up — thought I hit a perfect drive there. When I stood up, I went to tell Johnny that I absolutely knotted my 3-wood exactly how I wanted and he said it kicked into the bunker. I have no idea how it did that,” she said afterwards. 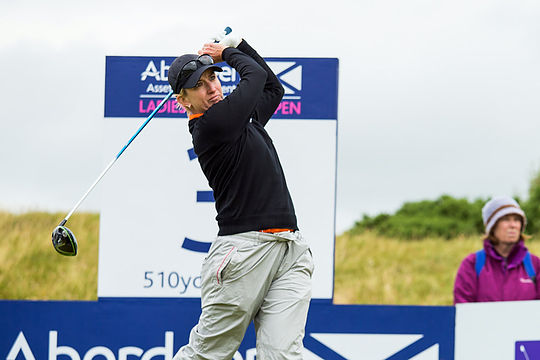 “Yeah, very gutted. I was on a high, making the eagle, and then I had a very nice up-and-down on the next. Even on the 17th tee, I hit the exact tee shot I wanted to get it down around those bunkers, and I’m not quite sure what happened to it, how it ended up where it did.”

“But even the last two, decent swings. I just had an in-between number unfortunately. I would have liked to have just hit a hard 8-iron but I couldn’t count on it carrying that front. But no leaderboard on the last, so I didn’t know I had to make that.”

Carlota Ciganda and Cristie Kerr were also in contention up until the final hole, but ended in a tie for fourth place after final rounds of 70 and 72 respectively.

“I think overall it was pretty tough conditions. So I think I finished on a good result going into next week. So yeah, just getting used to the conditions and adjusting,” said Lee.

“I’m striking it pretty well. I think I probably need to assess the wind a little bit better. Hopefully next week I’m on my game a little bit more and hopefully some of my putts go in, as well.”

Su Oh finished in equal 31st place on 5-over while Sarah-Jane Smith finsihed well back in the field at 12-over and in a tie for 63rd.

The LET and LPGA remain in Scotland and now head to Kingsbarns Links for the €3,000,000 Ricoh Women’s British Open.