Jeongeun Lee6, a 23-year-old rookie from South Korea, has claimed the US Women’s Open champion at the Country Club of Charleston, South Carolina, for not only her first major title but also her first career LPGA victory.

In a final round in which most of the contenders struggled under the pressure, Lee6 played in the manner of other South Koreans, who have found success in the oldest major championship in women’s golf, resolutely and calmly, to take control of the championship.

A bogey on the 72nd hole gave Lee6 a 70 and put her two strokes ahead of Angel Yin, So Yeon Ryu and Lexi Thompson.

“Six”, as the South Korean is commonly referred to, finished 6-under par to win the $1 million first prize.

Lee6 became the eighth Korean winner of the US Women’s Open since 2008, the 10th from her country to claim the Harton S. Semple Trophy and the 18th Korean winner in the past 36 women’s majors, going back to Jiyai Shin’s victory in the 2012 Women’s British Open.

Lee6 is also the 16th player from Korea to win a women’s major — more than any other country except the US.

Last year, Lee6 won the inaugural LPGA Q-Series, edging Jennifer Kupcho by one stroke. In eight LPGA events prior to the US Women’s Open, Lee6 hadn’t finished worse than tied for 26th, and she lost in a playoff at the LPGA Mediheal event in San Francisco. 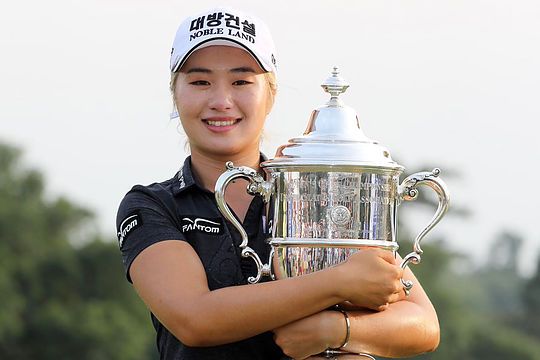 Through her interpreter, manager Jennifer Kim, Lee6 said her focus had been on a major.

“I didn’t really think about it,” said Lee6, who is projected to climb to fifth in the Rolex Rankings.

“All I’ve been doing was just focusing on this major championship, and I just wanted to play well.”

Minjee Lee was the best of the Australians finishing in a tie for 12th.

Hannah Green and Katherine Kirk share 34th position to round out the Australian contingent.