Audrey Leishman, the wife of Australia’s Marc Leishman, has slammed her fellow countrymen for their unruly behaviour at last week’s Presidents Cup in New Jersey.

In an article by good friend and colleague ESPN’s Bob Harig, the mother of three young children spoke first of her disappointment with the unsportsmanlike comments of American golfer, Daniel Berger on the eve of the third day’s play. 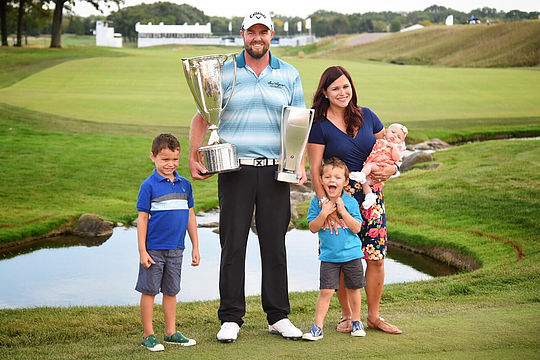 But she then singled out the unruly manners of the fans, and many who she noticed started drinking alcohol from as early as 7am and how the staging of the event clearly failed to deliver a true ‘coming together’.

Suffice to say Audrey has received compliments since going public but then she’s had to absorb ‘below the belt’ remarks, as well.

Personally, it is a sad reflection of the beer-fuelled ‘undesirables’ who attend team golf in the US and who go out of their way to spoil the occasion for the majority of decent citizens.

Poor fan behaviour at sporting events is nothing new, something from which golf has typically been exempt — except at team competitions, where the rowdiness of the home fans can at times cross the line.

Audrey Leishman, the wife of PGA Tour player Marc Leishman, said she experienced it herself last week at Liberty National, where the United States defeated an International team of golfers 19-11 in a competition that pits the Americans against a team of players from outside of Europe every two years.

Marc Leishman, a three-time winner on the PGA Tour including last month’s BMW Championship, is from Australia. His wife is an American and the couple lives in Virginia Beach, Virginia, with their three children.

Audrey Leishman’s post — written on a blog she started two years ago after she became gravely ill and nearly died due to sepsis — was trending for a time on Twitter.

“A lot of the response has been very positive and I’m grateful for that,” Audrey Leishman said in a phone interview Thursday. “Some of the negative things people are saying are a bit below the belt. I guess I don’t have thick enough skin, I’m not used to that, so I’m just trying to deal with it. I’m reeling a bit from it.”

In her post, Leishman first cited an interview American Daniel Berger did on Saturday when the US came within a point of clinching the event outright with a day to go.

“I mean, the goal from the minute we got out here was to just crush them as bad as we can and … I hope we close them out today and we got out tomorrow and beat them even worse,” Berger said.

Audrey Leishman wrote that those comments went beyond the sportsmanship and competitive spirit of the event.

“There were many times last week that I thought about what the kids were seeing,” she wrote. “The crowds booing for good shots and cheering for missed putts.”

“The drinking at 7 am? Screaming “Big Easy” to Ernie Els and begging for his autograph and then yelling at his players. Heckling a wife for her beauty and then her husband for his play. I was thankful my boys weren’t there to see the way people were treating their daddy. Their hero. My parents could simply turn the television off.”

Leishman said she has received reaction such as “this is sports” or “have you ever been to a soccer game” or “to get over it.”

But her point is not without merit. The Ryder Cup in Minnesota last year saw plenty of bad crowd behaviour, with US captain Davis Love III and Jordan Spieth so put off that they pointed out offenders in the crowd.

England’s Danny Willett and Northern Ireland’s Rory McIlroy were particularly vexed, with McIlroy referring to it as a “hostile environment.”

Leishman said it started from the first day of the competition on Sept. 28 and only tapered off on Sunday when the US victory was all but secured. She said it was a missed opportunity to “come together.”

“America has had a hard year,” she wrote. “Last week was a chance to come together over something so simple, the love of golf. I wish we could have shown our best. With the Statue of Liberty as our backdrop, we certainly should have.”

Leishman said this was not about the International players being “sore losers,” and that the team enjoyed its time together afterward and during the competition.

During the phone interview, Leishman again lamented the lack of decorum.

“I don’t understand why America wouldn’t want to show America it’s best,” she said. “Kim Johnson [wife of American golfer Zach Johnson, who was not on this year's team] said she’s never been treated anything but kindly overseas [at the Ryder Cup or Presidents Cup] and Zach has competed on several teams over there.”

“There were worse things that happened that I didn’t write about. I tried to be fair and that’s all I could really do.”