Greg Norman Medallist Marc Leishman has shot the round of the tournament, a 7-under 65 to have a share of the lead following round two of the Australian PGA Championship.

Teeing off at 6:10am in much kinder conditions than round one, Leishman was able to take advantage from the get go with birdies on three of his first five holes.

“I felt really good on the range and felt good yesterday as well. I was striking the ball well and thought I would be pretty aggressive all day, especially after making birdies on the first couple of holes,” Leishman said of his strong start.

“When you’re on a run like that and playing well, you sort of can afford to be aggressive. If you make a few mistakes, you feel like you can make some birdies.”

Winning one of Australia’s biggest tournaments is a significant omission from Leishman’s impressive resume and after his first two rounds in front of family and friends; the Warrnambool native is in a good spot heading in to the weekend’s play.

“We play tournaments all around the world and a lot of the places you don’t have a whole lot of support, so I think that would be the big thing.” 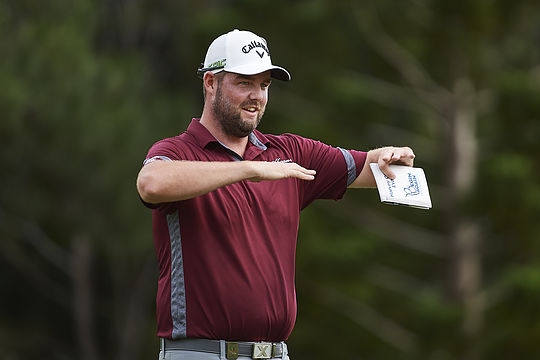 “To win a tournament that you’ve grown up watching on TV, that you’ve gone and watched as a kid, you go there and of course one day you hope you’re going to play in it and possibly win it. But yeah, if it was to happen, it would be pretty huge.”

South Australian Adam Bland shot 6-under 66 again for his share of the lead on 12-under the card, with just the one bogey amongst his seven birdies today.

Bland said he was looking to keep the momentum rolling and is now in a strong position heading in to the weekend.

The hot start to the tournament hasn’t come as a surprise to Bland who knows he can post low scores if his game is in a good rhythm.

“I feel like my game, like when I’ve been playing well, it’s been good. I just haven’t caught the momentum so I can’t really ride it and it’s been on and off.

Two-time Australian PGA Champion Greg Chalmers stayed in the hunt for a third Kirkwood Cup following a round of 6-under 66 to sit third outright at 10-under the card.

He said his short game has been crucial on the RACV Royal Pines Resort layout.

“My short game saved me a few times. I’ve been working really hard on my chipping and putting and I did a lot of that very well today. So I’m really pleased with the turnaround in my game over this week,” said Chalmers.

“Every green’s elevated, you’ve got a lot of runoffs around the edges, so you’ve got to have a lot of confidence and be able to read the green and what sort of shot to hit based on that because it can make you look pretty silly sometimes.”

Queenslander Cameron Smith is 9-under par after his round of 5-under 67 but can still see improvements heading in to Saturday. Like Chalmers, Smith’s short game was the savior in round two.

“It was actually a pretty scrappy 5-under today, I guess the total opposite to yesterday,” said Smith.

Defending champion Harold Varner III put himself in touch of the leaders after his round of 6-under 66 to be 7-under the card. Sergio Garcia is one further shot back on 6-under the card after a frustrating round for the Spaniard who shot 1-under 71.

“It wasn’t my best day out there today, I hit a couple really nice putts but probably a little bit tired I think physically and mentally,” said Garcia.

“Because of that, obviously my golf game wasn’t as sharp as I would like it to be. But I guess the good thing is we still fought hard, we stayed in it, and as uncomfortable as I felt out there, to be able to still shoot 1-under, it’s a positive thing.”

Adam Scott had a disappointing round, his 50th round in the Australian PGA Championship tournament, shooting 2-over and will miss the weekend rounds.

It’s the first missed cut at the Australian PGA Championship for Scott since 2010.

“Like I said at the start of the week, I’ve got to lift my ball striking up. That’s where I lose too many shots and that’s the strength of my game,” said Scott.

“I’ve got to bring that back up to standard and that will just take some work when I get myself some time and I’ll be able to put some work in.”

The cut was made at 1-under the card with 75 professionals making the weekend rounds.

Round three will begin at 6:26am with the leading group of Marc Leishman, Adam Bland and Greg Chalmers teeing off at 11am.