Marc Leishman blitzed the field with a dominant front nine at TPC Kuala Lumpur before cruising home to secure a commanding five-stroke win at the CIMB Classic on Sunday.

Leishman claimed his fourth PGA Tour victory in his first start of the new season at the US$7 million co-sanctioned tournament after shooting a final round 7-under 65 to finish at 26-under.

Last season Leishman secured two runner up finishes and four other top-10′s without a win on the PGA Tour last season and was ecstatic to claim another victory.

“I am very happy to get another win. It had been more than a year since I won. I have had a few chances and didn’t capitalise,” said Leishman. “I want to try and win something else before the end of the year but this is awesome.”

“The kids will be very happy that I’m bringing home a trophy.” 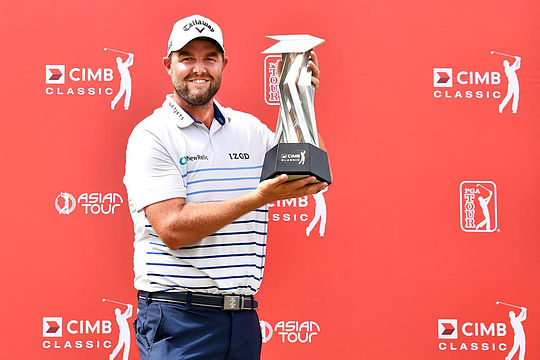 He entered the final round of play on Sunday in a three-way tie with Woodland and India’s Shubhankar Sharma after finishing 19-under on Saturday.

Leishman started well with four birdies in the first five holes, before sinking another long birdie putt on the ninth.

Two more birdies followed on the 10th and 16th followed, with a bogey at the 13th the only blemish on his score card, before the Australian birdied the final hole for victory. He needed just 102 putts over the four rounds as he drained almost everything.

The victory comes with a winner’s cheque of $US1.26 million and guarantees two more years on the lucrative PGA Tour.

Americans Chesson Hadley and Bronson Burgoon finished joint runner up with Argentina’s Emiliano Grillo on 21-under, while headliner and two-time champion Justin Thomas was tied for fifth a stroke further back after closing strongly with a 64.

After winning his first PGA Tour title in 2012 at the Travelers Championships it was five more years until Leishman won his next two titles with the prestigious Arnold Palmer Invitational in March of 2017 then the BMW Championships in September.

He lost in a playoff at the British Open in 2015, his best finish in the majors.

Sunday’s win was his fourth PGA Tour win in 250 starts, but third in last 44 starts.

Leishman is set to team with Cameron Smith at next month’s World Cup in Melbourne before contesting the Australian PGA Championship on the Gold Coast, although he’s skipping the Australian Open in Sydney to be at home with his kids.

Smith was the next best Aussie in Kuala Lumpur finishing in a share of 22nd at 16-under-par, with the pair the only Australians in the field.