Leishman, Day get off to slow starts at East Lake

Marc Leishman was glad to find the comfort of the East Lake clubhouse in battling his way to a one-over par 71 on day one of the season-ending Tour Championship.

It left the Victorian sharing 21st place and seven shots behind American Kyle Stanley, who signed for a sizzling six-under 74 in the hot and humid conditions just east of the Atlanta CBD.

Leishman was running virtually on the smell of an oily rag after the superb efforts in his last two events starting with a gallant third place in the Dell Technologies and then leading from start-to-finish to capture the BMW Championship.

Leishman was both tired mentally and physically following an opening East Lake effort that included two birdies but also a bogey and an unlucky 13th hole double-bogey where his drive was left and it took the Victorian five shots to get down from 144-yards out.

“It was all pretty ordinary out there and I didn’t drive the ball all that well and I couldn’t get the speed of the greens so one-over was not all that bad considering,” he said.

“I am a bit low on energy but then there is plenty to help lift you here this week.” 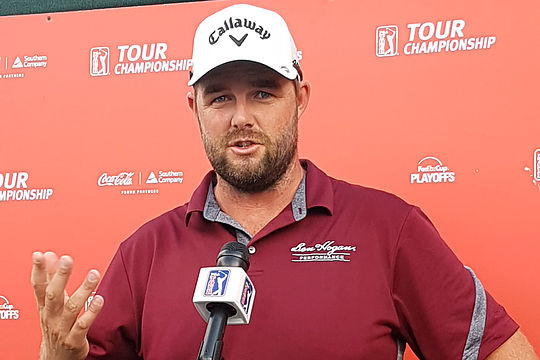 Marc Leishman discusses his opening round with the media following a 1-over 71 at East Lake (Credit: Bernie McGuire)

“So, hopefully another good night’s sleep tomorrow and I should be right to go. The thing is I haven’t shot myself in the foot with a 71 and it was just one of those days where a missed a few putts and then there was a few bad drives left that I don’t normally hit left like that one on 14 where I took double that was disappointing.”

“But there was a lot of other holes where I could have had bogeys and that was down to some good scrambling.”

“So, if this is my poor round for the week then I will be happy.

Leishman played the first round in the company of World No. 1 Dustin Johnson and the two had plenty to talk about on their way around course, with both having had children born recently and both girls.

“It was good playing with DJ today being the best player in the world and he played well for his two-under score,” said Leishman.

“He and I had a good chat around the course. He was congratulating me on my win and we also spoke about slow play, and also talk about our kids and really just chewing the fat out there.”

In ending his round, Leishman gladly signed a golf ball which he gave to one of the walking scorers who indicated to Leishman her daughter had broken her arm earlier today and a signed ball would certainly lift her spirits.

Jason Day, the only other Australian in field, posted a 1-under 69 to be sharing 11th place and like Leishman he is also now looking for a low second day score.

“That wasn’t a bad start and it felt good while the only thing that I was a little disappointed about was my chip shots out of the rough,” said Day.

“So, I need to tidy-up that aspect of my game and also drive the ball a little straighter.”

“The Bermuda rough can just be so inconsistent and when you think you have a decent lie and it is going to come out good, it comes out soft and vice-versa and the other way around.”