Marc Leishman brought the curtain down on an emotional 2015 with a stunning victory at the Nedbank Golf Challenge on Sunday.

The Australian nearly lost his wife in April after she fell seriously ill with toxic shock syndrome, a rare but life-threatening bacterial infection which resulted in her being put into an induced coma. 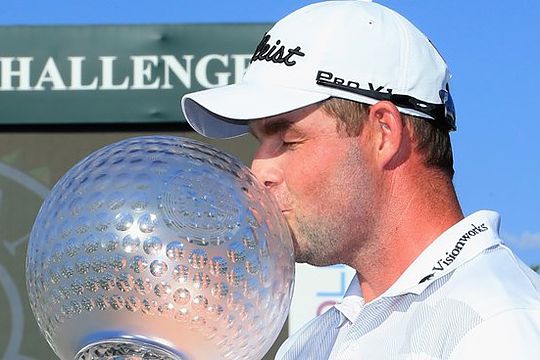 Thankfully, Audrey pulled through but Marc admitted he feared the worst and was prepared to give up golf to care for their two young children.

Fast forward eight months and Mrs Leishman is now recovering, and her husband has ended the calendar year with his first win on The European Tour after finishing six shots clear of Henrik Stenson at Gary Player Country Club.

Leishman came into the final round with a one-shot lead, and a brilliant closing 67 moved him to 19 under, making him just the second Australian to win the Nedbank Golf Challenge after Robert Allenby’s triumph in 2009.

The victory completed a stunning day for Australia on The European Tour with Nathan Holman claiming the Australian PGA Championship earlier in the day.

The final round turned into a straight shoot-out between 2008 champion Stenson and Leishman, and while the Swede recorded a closing level par 72, he could not keep pace with Leishman who pulled away with four birdies on the back nine.

“It’s amazing. I’m so happy. It’s not very often you can walk up 18 with a good cushion and enjoy it,” said Leishman.

“I knew it was going to be a really tough day, I knew I had to play well. Henrik’s an awesome player and I knew he’d make me earn it, which he did.”

“I’m really pleased that I could play as well as I did and have a little bit of a buffer there at the end.”

“Golf’s a lot easier when you don’t have to make up lost ground, especially on this golf course where there’s trouble everywhere. I was really happy to not have too many bogeys. I definitely found out where the trouble was in the practice round.”

He added: “I’m pretty happy to have this year over, to be honest. Audrey got very sick and I lost an uncle who I was very close to. This tops off what was otherwise not a great year. Three weeks ago we moved into a new house, so this will help pay for that.”

Chris Wood finished in third place on nine under with defending champion Danny Willett, Victor Dubuisson, Branden Grace and Robert Streb all a further shot back.

Leishman and Stenson both looked to be in trouble on the first but the Swede did well to make par after sending his tee shot right while Leishman holed a testing putt from the fringe.

Jaco Van Zyl, the third member of the final group, had dropped a shot on the first but recovered with a brilliant approach on the next to secure his second eagle of the week and get to 11 under par – having picked up six shots over the week on the second.

Stenson went left off the tee on the third and had to lay up, resulting in a dropped shot, while Leishman also gave one back after finding the sand with his second shot.

Pars followed at the fourth and fifth for the leading group but when Van Zyl put his tee shot on the sixth left and made a double-bogey, it looked like developing into a two-horse race.

Stenson found the sand on the seventh to drop a shot and when Leishman made a testing ten-footer for birdie on the par three, the lead was three shots.

But the World Number Seven is made of stern stuff and he holed a 15-foot putt on the eighth for a birdie while Leishman could only make par after putting his second shot in the bunker.

Both of the leading duo then made birdies on the par five ninth as Van Zyl recorded a second consecutive bogey to effectively end his chances of victory.

Further gains followed for Leishman and Stenson on the tenth and when the former put a stunning approach on the 13th to within a foot, the lead was back up to three.

Leishman had birdied the 14th in all three of the previous rounds this week and had a four-foot putt to make it four out of four but let the chance pass before Stenson got in big trouble on the next.

He put his tee shot into the trees on the left to drop a shot as Leishman rolled in a 20-footer for birdie, and the 32 year old had a five-shot lead to take up the last three holes.

And when he got another one to drop from similar range on the next, the final two holes became a procession as Leishman eased his way to a comfortable victory with Stenson chipping in on the 17th before bogeying the last.

Wood was two over for his round as he stood on the ninth tee but he made an eagle on the par five and then followed it up with a birdie before a hat-trick of gains from the 14th catapulted him up the leaderboard.

Willett appeared to have put his back problems behind him in an unblemished 68 with Dubuisson also going round four under par with a brilliant chip-in on the sixth the highlight of his round.

A double bogey on the last saw Streb slip to a 73 while Grace also dropped a shot on the last in his 71.

Byeong-hun An, fresh from being crowned the Sir Henry Cotton Rookie of the Year, was then at seven under with Charl Schwartzel and Thongchai Jaidee a further shot back.