Marc Leishman has shot the lights out of the Trinity Forest Golf Club firing a 10-under 61 to secure a three-stroke lead on day one of the AT&T Byron Nelson Classic.

Leishman kicked off his round with an eagle at the 552 yard, par 5 opening hole before birdieing the 6th and 7th holes to make the turn at 4-under.

The world number 16 then cranked up the heat with birdies from the 10th through to the 12th holes before another eagle at the monster 630-yard par 5 14th.

From that point he would have to birdie every hole on the way in to reach the magical 59 figure but a lone birdie at the 17th saw him settle for a PGA Tour career-best 61.

“It was certainly one of the best driving days I’ve had. Hit everything, every fairway, that’s important around here. The fairways are generous but you still have to hit them,” said Leishman.

“The putter was hot. That combination is a nice way to start the tournament and shoot a low round.”

The statistics from his round paint a clear picture with the Victorian hitting 100% of his fairways and 95% of greens in regulation – an achievement made all the more remarkable considering this is the first time the tournament has been played at this course. 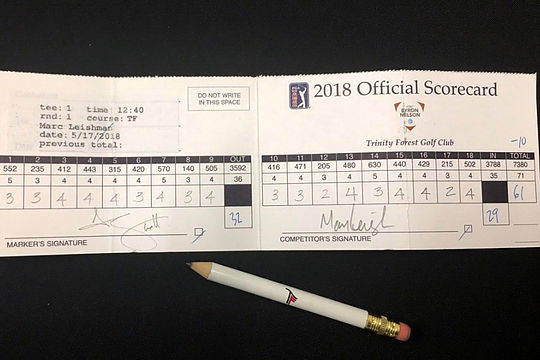 Fellow Aussie Adam Scott, a winner of this tournament in 2008, continues his welcome return to form signing for a 4-under 67 to sit alongside fellow countrymen, Matt Jones and Cameron Percy.

The 13-time PGA Tour winner, who named his second child, Byron, in honour of the tournament’s namesake, has no top-10 results to his name this year.

However, there are signs that could be changing soon following three rounds in the 60′s at last week’s Players Championship for a T11 finish.

Much like Tiger Woods’ recent results, Scott knows that he needs to capitalise on his good rounds and start getting some consistency back into his game if he is to secure his next PGA Tour victory any time soon.

Currently ranked 65th in the world, Scott will need to move inside the top 60 before either May 21 or June 11 to gain automatic entry into the US Open.

The alternative is to do it the hard way via sectional qualifying – a route he would no doubt be keen to avoid.