Marc Leishman has claimed his fifth PGA Tour title winning the Farmers Insurance Open in San Diego on Sunday. Leishman’s putter was red hot as he finished at 15-under-par, closing with a 7-under 65 to win by a stroke over Spaniard Jon Rahm.

The 36-year-old carded seven birdies in his first 13 holes moving to a comfortable lead heading into the back nine and Leishman continued to play solid golf, his only blemish a bogey at the par 4, 17th before making a clutch 1.8 metre birdie putt on the last.

“This feels pretty amazing. I wasn’t expecting this at the start of the day. (I’m) elated,” said Leishman, whose PGA Tour earnings have now reached $US28.9 million.

“I putted as good as I’ve probably ever putted today. I made some good birdie putts early and then some great par saves later. They’re probably even more important than the early ones.”

The new World No.20 began the day four strokes behind Rahm, who dropped four shots in the first five holes.

However, over the back nine Rahm was able to re-group and make a move on Leishman. An eagle and four of his five birdies on the back nine, including three birdies to end his round, got Rahm back into contention.

On the final hole Rahm had a putt for eagle to force the tournament into a playoff but the putt came up short to give Leishman the victory.

Rory McIlroy, needing a victory to return to No. 1 in the world, started three shots behind in the final group and opened with two straight bogeys. McIIroy went on to shoot 69 and tied for third with Brandt Snedeker in his first start for the year. 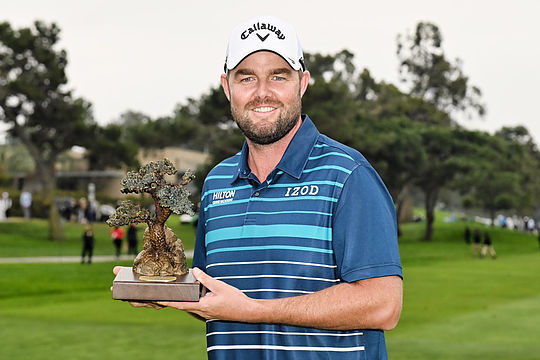 Tiger Woods, trying to set the PGA Tour record with his 83rd career victory, was not able to get his “A” game going and had to settle for a 70 and tied for ninth, six shots behind Leishman.

The next best of the Australians was two-time Torrey Pines champion Jason Day at 7-under-par in his first game back from injury.

Cameron Percy and Cameron Davis shared 36th at 4-under, while Aaron Baddeley, Cameron Smith (even par), Rhein Gibson (two over) and Matt Jones (four over) rounded out the Australian contingent.

Leishman was the second Australian to win on Australia Day, following Lucas Herbert at the Dubai Desert Classic on the European Tour earlier on Sunday.

Herbert and Leishman will also have been inspired by seeing fellow Aussie Cameron Smith win on the PGA Tour earlier this month at the Sony Open and Wade Ormsby, who won in Hong Kong.