Bizarrely, Marc Leishman proudly still has the golf ball Greg Norman handed to him as a seven-year old at the 1991 Australian Masters.

Leishman revealed he also grew to admire Norman thanks to a life-size cardboard cut-out of Norman a local Warrnambool Holden dealership presented to him that Leishman kept in his bedroom. 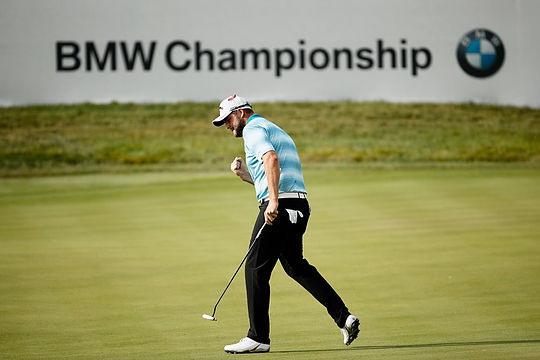 And in returning to competition for this week’s PGA Tour season-ending Tour Championship and FedExCup decider, Leishman spoke of the inspiration he gleaned from a text message he received late last Saturday night (Chicago time) from Norman.

“Greg texted me to say, ‘Run through to the finish line’ and then on Sunday after I had won Greg texted me to say, ‘Well done and congratulations’ so it was great for someone like Greg, and who I have admired for so long and who was the inspiration for me to get into golf, should go to the trouble to text me,” said Leishman.

“In fact, I’ve still got the golf ball when I first saw Greg Norman. It was during the 1991 Australian Masters at Huntingdale.”

“I also had one of those cardboard cut-outs of Greg and I got that from the guy who owned the local Holden dealership, and I must have kept that in my bedroom for about five years.”

“But those were the things we would do as youngsters collecting items featuring your sporting idols.”

Of course, Norman’s was not the only congratulatory text message or email Leishman received following his Conway Farms triumph.

“It’s been pretty busy and it took me until about 6pm Monday to catch up to the text messages, I was replying,” said Leishman.

“They were coming through quicker than I could reply. That’s pretty cool. You know you’ve done something decent when that happens.”

“So, it was nice to get that one from Greg as it to receive one from Adam Scott, guys that played our golf day, Kevin Sorbo, Kent Bazemore. There’s a lot of guys that are actually going to be at the tournament this week that sent really nice texts.”

“I was also getting text messages all week from Pricey (Nick Price) as he has almost been like a mentor to me, so he’s been really, really good.”

“It’s just such a good feeling to be able to read those and know that people are really happy for your success.”

He got his first look in eight-years at this week’s host venue on Tuesday when he played a practice round with just his caddy and father, Paul for company.

In 2009, Leishman was contesting his first full season on the PGA Tour and his trip to East Lake, even before tee-off, secured him the prized ‘Rookie of the Year’ award. It also marked the last time he had played the finale before qualifying for this year’s edition.

“The first year I got in, I wanted to make a habit of being here, and I didn’t, so it’s nice to be back here this year,” he said. “Golf’s a funny game. It can change very quickly.”

For the record, Leishman finished T28th in the 30-player field that year shooting a horror last round 78 to trail 22 shots behind Phil Mickelson.

Eight years on, Leishman is now a favourite to win the Tour Championship and Mickelson failed to qualify.

Leishman mentioned at the prize-giving ceremony last Sunday his parents were ‘in-flight’ when he was being handed the two gleaming trophies and having travelled from Melbourne to Los Angeles where they managed to watch the opening nine holes of Sunday’s last round before boarding a flight to Atlanta where the victory became known.

“They got to watch the front nine in LA airport, then they got on the plane to fly to Atlanta with nine to go and there was no wifi on the plane,” said Leishman.

“So, they got off the plane and their phone lit up with text messages. I spoke to them probably about 9pm. That was a pretty good phone call to make.”

“It’s just great to be in a situation to make your parents proud like that. I picked them up from the airport in Virginia Beach Monday morning and we celebrated Monday with mum and dad and the family.”

“It’s just a good feeling to do that. And that first beer with dad was very, very nice.”