Marc Leishman has finished third at the Shriners Children’s Open on the PGA Tour closing with an impressive final round 63 to finish five shots behind eventual winner Sungjae Im.

It was Leishman’s second top-5 result for the 2022 PGA Tour season after finishing in a share of 4th position at the Fortinet Championship last month.

“I did everything pretty well, really,” said Leishman. “Hit my irons really well. Made the pitches. Yeah, drove it well. So you have to do everything pretty well when you shoot a number like that. To do it on a Sunday makes you feel pretty good. Hopefully I can continue on next week and for the rest of the season.”

For South Korea’s Sungjae Im it was his second PGA Tour victory. The 23-year-old carded four birdies in his opening seven holes on Sunday and then another five straight birdies between the 9th and 13th to be at 9-under-par through 13 holes to record a final round 62. His rounds of 63-65-70-62 left him at 24-under-par. 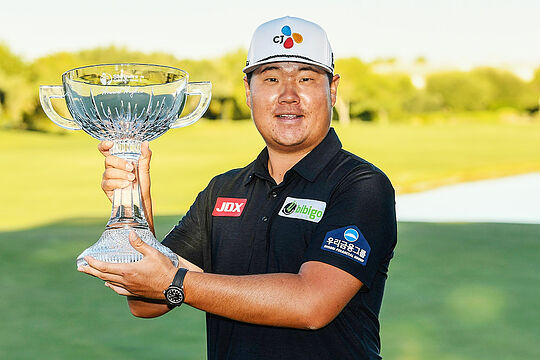 He previously won the Honda Classic in 2020 in his 50th start on the PGA Tour.

“Very meaningful win,” said Im. “It was hard coming, but I think today how everything went, I think it was a gift from above. I played so well and I’m glad I got the win.”

Im won US$1.26 million for the victory to move into second place on the FedExCup standings behind Sam Burns. Leishman moved from 9th to 7th with his weekend result.

Burns won last week’s Sanderson Farms Championship for his second career PGA Tour title but could not get it going this week firing a closing round 72 to finish in a share of 14th position.

“This game is like, when I’m in the lead or contention, someone just seems to go off the last day on me,” remarked Wolff.

“But if I keep on putting myself in these positions I know that eventually it’s going to be in my favour and I’m going to win.”