Grace Lennon called on all her experience to stage a wonderful comeback to win the Ladies Riversdale Cup in Melbourne on Sunday.

Lennon, who was the top amateur a few weeks back at the Victorian Open, fired a closing round 4-under-par 69 to snatch a one stroke victory over Su-hyun Oh, after Oh closed with a 1-over-par round of 74. 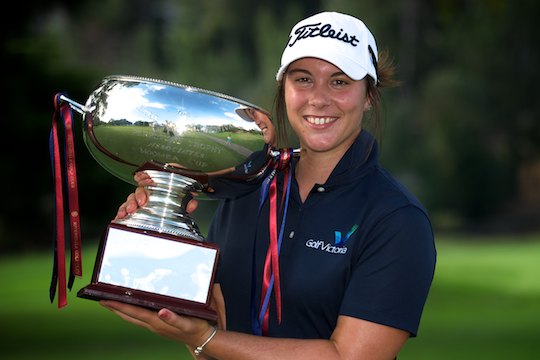 Oh, the current world number four, had held the lead since Friday’s second round and struggled during the challenging conditions on Saturday.

Lennon in contrast was consistent and managed to keep the high numbers of her card.

It was inspiring stuff from Lennon, who attributes recent work she has done with Jamie Glazier as giving her the mindset to compete at this elite amateur level.

“I am really please with the way I was able to close out this event,” said Lennon who started the final round four behind the leader Oh.

“To come from behind and play the back nine with two birdies and just a bogey to win here gives me plenty of confidence with where my game is heading.”

The Match Committee for these championships did not let the ladies have it easy with many of the tees near or on the same level as the mens.

Scoring was difficult and Lennon went into the final round knowing that.

“This whole week has been a tough challenge,” she said.

“Birdies were difficult to come by, yet I knew that if I hung in there and stayed focused on my own game and not worry about what others were scoring, that I would be in with a chance.”

Lennon was the top-ranked amateur a fortnight ago at the Victorian Open where she secured a top-12 result against a stellar international field that included Laura Davies, Nicki Campbell and three time winner on the Ladies European Tour, Stacey Keating.

“I took a lot away from the experience in playing the Victorian Open,” said Lennon.

“I learnt to stay within your own zone and not worry about what is happening with other player’s scores. This approach certainly helped me this week at Riversdale. This is such an honour to win an event like this.”

Lennon broke into the World Amateur Golf Ranking top-20 courtesy of a string of good performances to start the 2013 season.

Yet it has been in the professional events where Lennon has risen to the occasion finishing in a tie 33rd in the New South Wales Open before her top-12 result at 13th Beach.

“I’m generally pleased where my game is heading,” she says.

“Winning the Riversdale Cup is a massive victory for me and caps off a pretty good couple of weeks. Hopefully, I can continue with this form and take my game further, but at present I’m just enjoying this victory as it is very special.”