Sweden’s Linn Grant made history in her nine-shot victory at the 2022 Volvo Car Scandinavian Mixed to become the first female winner of a DP World Tour event.

The 22-year-old produced a near flawless round on Sunday to keep a host of DP World Tour players at bay and claim her third Ladies European Tour title in just six starts this season finishing at 24-under-par, nine shots clear of Henrik Stenson and Marc Warren. 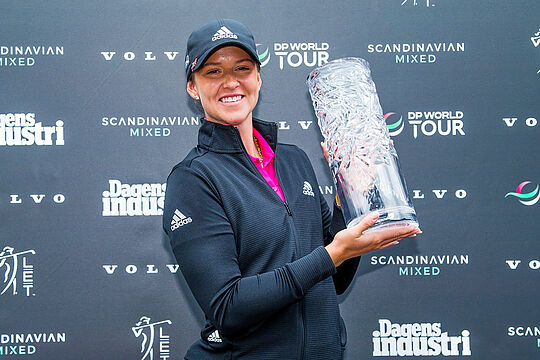 Grant, who also won the Joburg Ladies Open and Mithra Belgian Ladies Open on the LET this season, took full advantage of playing off shortened tees to the male competitors to claim what she described as a significant victory, an event where 78 women from the Ladies European Tour and 78 men from the DP World Tour play over the same course for one prize fund.

“I hope this victory is big,” said Grant. “I hope it brings women more forward and it gets people’s eyes on us a little bit more. It is always nice to say that you beat the guys for a week! To be able to speak Swedish and hear everyone out there cheering for you, it was amazing.”

The tournament broke new ground 12 months ago, when golfers from the men’s and women’s European tours joined forces for the first time.