Alexander Levy created history becoming the first Frenchman to win two tournaments in a season in capturing the rain-reduced Portugal Masters after the third and final round had to be abandoned due to heavy rain in Vilamoura.

In a tournament already reduced to 54 holes by lightning and heavy rain earlier in the week at Oceånico Victoria Golf Club, another deluge left parts of the course unplayable shortly after the final group had teed off at 1pm, and the decision was taken a couple of hours later to call the result at 36 holes. 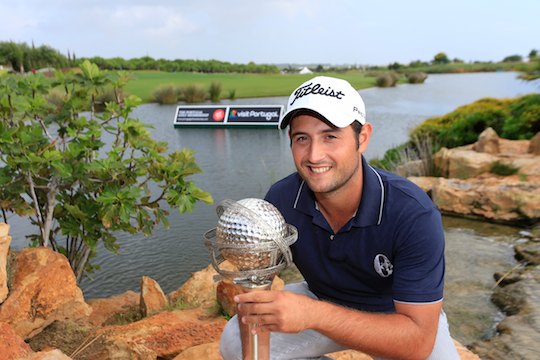 Tournament Director José Maria Zamora said: “The forecast for the final round was fine, but after two unexpected very heavy downpours on a course already saturated, it would have taken several hours to make it playable again.

“Over the course of the week we had 75mm of rain, and 12mm this afternoon, and unfortunately we had to curtail the tournament after 36 holes despite the tireless work of the green-keeping staff.”

However the question has to be asked why the Tour did not go with a two tee start that would have avoided any threat of further rain.

The 24 year old Levy, whose rounds of 63 and 61 saw him finish with an 18 under par total, took his second European Tour title by three shots from Belgium’s Nicolas Colsaerts as a result – both had parred the opening hole today before play was suspended.

“If at the start of the year you had said I would win two tournaments I would say ‘never!’ to you.

“It’s a very nice feeling and I’m very happy. I work hard on this game and I think I played a good game this week.

“I played only four shots at the weekend and I won the tournament, but the most important thing is I have the trophy in my hand.”

Levy’s win on top of his success earlier this year in the Volvo China Open sees him become the first French-born golfer in the history of the European Tour to win twice in a single season.

Levy was one of the lucky ones who managed to get his second round completed on Friday meaning he did not play at all on Saturday and he admitted it was a strange feeling to have won after playing only two rounds.

“It’s special,” he added. “Because you are only on 36 holes but after Friday night I knew I would only play 54. But it’s a special feeling at this time.

“I don’t realise a lot because I was focused to play this last round and try my best to win this tournament.”

Levy will now head to England to play in the Volvo World Match Play Championship next week before he approaches the Final Series as The Race to Dubai reaches its conclusion and he is hopeful of maintaining his good form.

“I’m going to try to play like I played the first two rounds,” he said.

“I’ve impressed myself with the way I’ve played golf and I think I need to continue like that.”

Chile’s Felipe Aguilar was third on 13 under, with Richard Bland, Morten Ørum Madsen and Romain Wattel tied for fourth.

There were no Australians in the field this week, however a large contingent from Down Under is expected to tee it up later this week at the $1.3m Hong Kong Open.