Alexander Levy has taken out the Volvo China Open for his fourth European Tour victory following a play-off against Dylan Frittelli in Beijing on Sunday.

The 26-year-old Frenchman won the tournament for the second time in three years carding a closing 5-under 67, to come from seven shots off the overnight lead after defeating Frittelli in the first hole of a sudden-death playoff. 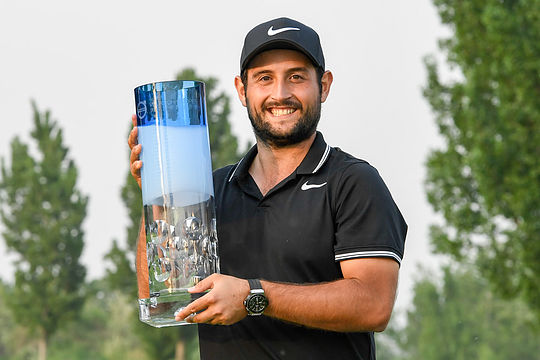 Levy’s final round 67 consisted of birdies at the sixth, eighth, ninth, 11th, 15th and 18th holes with his only bogey coming on the par-four seventh to end clubhouse leader on 17 under.

Having become the first man to win the tournament twice, Levy immediately set his sights on earning a Ryder Cup spot in time to compete in his homeland in 2018.

With the 2018 Ryder Cup taking place just outside Paris, the 26-year-old admits making his debut at Le Golf National is one of his main priorities for the next 18 months.

Putting Ryder Cup aspirations aside, Levy was enjoying the moment and rejoicing in his hard earned victory.

“That’s an amazing feeling to be back in the winner’s circle. This means a lot because it was the first tournament I won on the European Tour.”

“I won last year after a bad injury and to come back with the win was very tough for me. I’m really happy with what I did today.”

Frittelli began the day as the clear favourite to win his first European title but the pressure showed early when he had his first bogey in 43 holes at the par four fifth which momentarily halted his momentum and then a double bogey on the par five 12 stopped his charge in its tracks.

Frittelli then seemed to recover with a birdie on the 15th but bogeyed the 16th and picked up two pars to finish his round on a two over 74 and end up tied at 17 under with Levy.

The final nine holes, where a four-shot lead was squandered, will be difficult to put behind for Frittelli, yet the South African did demonstrate the ability to bounce back and it shows how hard it is to win on tour.

“That would be a great goal to achieve. I am hoping to have a very long career so I’m not going to let this get me down or be upset with anything.”

Sam Brazel finished the best of the Australians in a tie for 48th position along with Jason Norris. Brett Rumford shared 59th position with Mathew Guyatt in 65th.